#BlackOut Day is a much-needed celebration of heritage, not an assertion of superiority 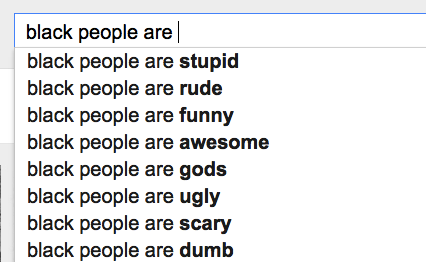 Google searches are an excellent indicator of society's views of people groups, as well as the inequality and prejudice that African Americans face in the United States today.

Although not established as an annually-observed event like March’s International Women’s Day, a phenomenon celebrating a different underrepresented group spread like wildfire on social media on March 7, #BlackOut Day. The event was purely intended as a celebration of race as well as a peaceful protest of the inequality between African Americans and white people that still exists in society, yet it also gave rise to a bitter counter-trend, #WhiteOut.

Like Meninism is to Feminism, #WhiteOut served one purpose only- to dismantle #BlackOut. Many Twitter users who adopted the #WhiteOut hashtag claimed that Black Out Day was an unnecessary assertion of the superiority of one race over the others, and whites should also celebrate their skin color. However, when the entire purpose of a movement of equality for one group of people is to essentially override the strides of another group with less influence in society and politics, movements like Meninism and WhiteOut become weapons of destruction rather than tributes to gender and heritage.

Under #BlackOut or #BlackOutDay, people groups of primarily African and African-American descent participated in the celebrations by posting a picture of themselves, accompanied by descriptions of why they chose to be proud of their heritage despite living in a society with “Eurocentric” standards of beauty. Like many pointed out over Twitter and Tumblr, Google searches are perfect indicators of society’s view on people of color. For example, in the Google image search “beautiful woman,” the images of women generated are overwhelmingly blond haired and light skinned, with either none or one faces of African American women per page of search.

Upon closer inspection, the effect of “Eurocentric” beauty standards can be reflected nearly everywhere in the media, not so differently from the views of the white nation over a century earlier. In history classes today, students are shown advertisements and posters from the late 19th and early 20th century, most portraying African Americans as foolish or easily manipulated for the entertainment of whites. In addition, events from the early 1900s like the Worlds Fair served as an accurate portrayal of the views of white Europeans of colored people at the time. At these fairs, new and exciting European technology served as the primary attraction, while people of color from Asia and Africa were brought in to serve as examples of how advanced Europe was in comparison to the those of color.

For years, prejudice against people of color has been ingrained in our history, in our minds. That needs to change. Even today, the “smart” or the “beautiful” stereotype does not emphasize African Americans, and it should. The wonderfully unexpected, but so incredibly needed #BlackOut day has helped the nation realize that. One day a time will come where all the races are equal in the minds of the world, and #WhiteOut day and #BlackOut day can occur harmoniously. Until that day, however, it is critical that we open our ears to the voice of underrepresented groups and celebrate their many positive contributions to our lives.