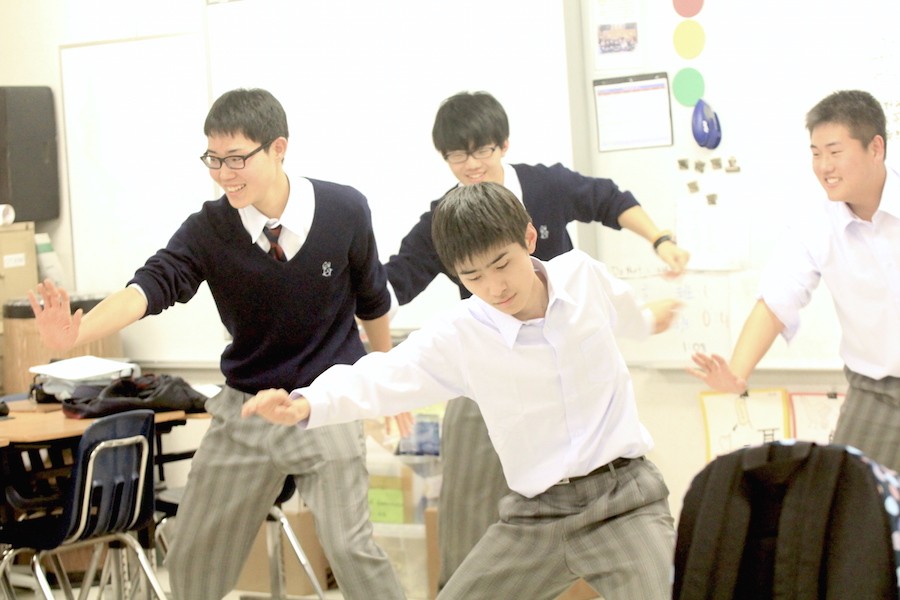 On March 4, students of Wakayama Chiben School dance in the Japanese trailers during eighth period.

As a part of the 22-year-old exchange program with the Wakayama Chiben School in Wakayama, Japan, 12 Japanese students arrived on March 2 for a two week stay with Jefferson host families and will leave on March 15. This exchange program is a long-honored tradition at Jefferson, with two Jefferson families leading the planning of the international students’ American experience.

“Being the student leader means that I plan the after school activities and lead the group when I am there,” Shen said. “Since it is I-Nite crunch time, I’m not always there but I leave instructions for someone I trust to take charge.”

To help welcome these foreign exchanges, the Jefferson Japanese program has taken students on field trips to Washington, D.C. and various other fun venues on the weekends. March 3, 5 and 9 are planned as field trip days, although the March 5 trip was canceled due to inclement weather. However, host families also gather to make plans on the weekend.

“We usually break into smaller groups and do things like shopping, going to museums, movies, etc. As a group, we are planning on karaoke and laser tag,” Nepomuceno said. “My student likes animals, so my family is planning to take her to the zoo if the weather doesn’t suck.”

Although speaking in a foreign language is difficult, the host students have found ways to connect with their exchange students.

“It’s a drag to try and break the language barrier, but once you do, it becomes really interesting to know their culture and learn more about them and just see how we share a lot of the same things,” Baek said. “I’ve been trying to find some common ground, especially with anime.”

Japanese students have also been able to sort out for themselves the truth and myth of life in America by observing it first hand in classrooms and households.

“American towns are less different than I thought from Japan,” Kyoji Morita, 16, said. “New York and Boston are similar to Tokyo and Shizuoka, which is interesting.”

As is the case with the several exchange programs Jefferson offers, students are able to make lasting connections that show the usefulness of foreign languages from a practical standpoint.

“It’s nice being able to make a new friend from a different country, and its different than just talking online, they become almost like a sibling,” Woodford said.