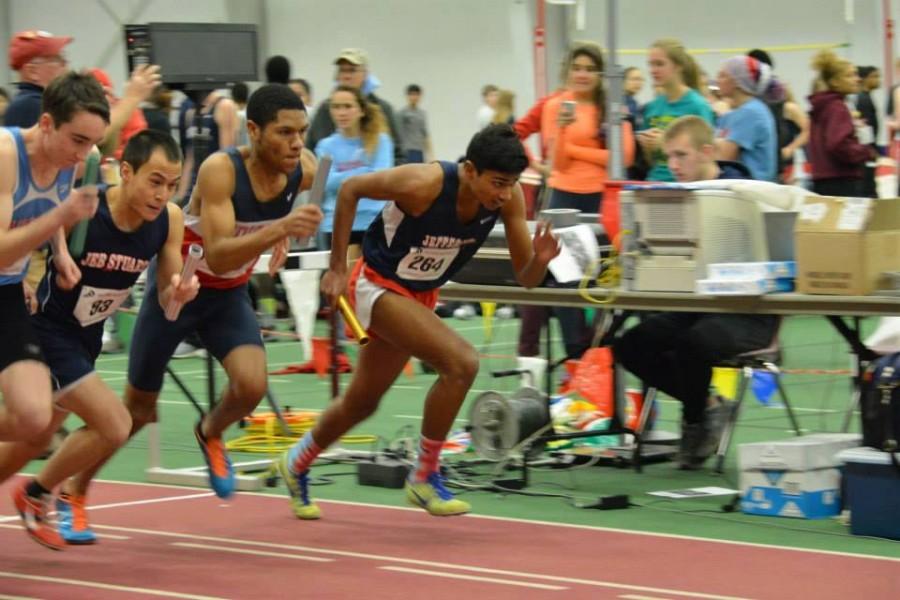 At the Conference 13 Championships, sophomore Saurav Velleleth kicks off the first leg of the boys' 4x800 relay.

Throughout this winter, Indoor Track saw some remarkable achievements from both new and returning athletes. The track season had its last meet at the Virginia High School League (VHSL) Capitol Conference Championships, where Jefferson star athletes performed their best and placed high in many events. The Jefferson girls’ team finished third out of the five participating schools with a score of 32, while the boy’s team placed fifth out of eight with a score of 20.5.

“We didn’t have as many meets as usual, so we had a nice amount of downtime to train especially hard for conferences and postseason,” senior Haley Stumvoll, long-distance captain, said. “I was injured for a bit, so I’m hoping to improve my times much more at regionals and states.”

Stumvoll placed first in the 3200 meter run, and second in the 1600 meter. She will be competing at the Regionals on the 18th. Seniors Stumvoll, Katherine Junta, Mary Pollin, and sophomore Abigail Shoemaker ranked second at the Girls’ 4×800 relay, while senior Christopher Blagg, juniors Nate Foss and Alex Hoganson and sophomore Saurav Valleleth placed first in boys’ relay. Other individual achievements include junior Jordan Ganley and freshman Meredith Lee, who placed fourth and second respectively in Shot Put, senior pole vaulters Monique Mezher and Carolina Hatanpaa who placed second and third respectively, and junior Claire Dong and senior Stephanie Chen, who placed third and fourth at the 55 meter hurdles.

“Next season, we are hoping to get a lot stronger in the 4x800m relay, and I generally want to get better PRs to end the senior year strong,” Stumvoll said.