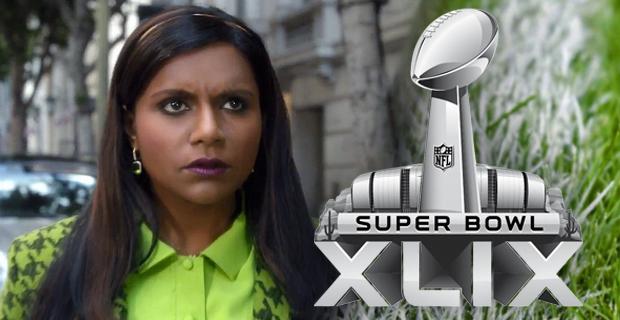 Actress Mindy Kaling stars in one of Nationwide's commercials for the Super Bowl this year, held on Feb. 1.

Every year, millions of viewers tune in to watch the National Football League (NFL)’s Super Bowl, the annual championship that ends the season. The tradition of eating chicken wings and chips, gathering with friends in front of television sets and betting on the winning team has seeped into American culture–and companies vie for a coveted advertising spot during this highly publicized event.

This year, on Feb. 1, approximately 114.5 million people watched the NFL Super Bowl XLIX, which pitted the New England Patriots against the Seattle Seahawks. Though the game was exciting, the commercial breaks also kept us glued the screen. We have chosen the ten best commercials that shook our hearts and had us laughing.

Every year, Frito-Lay hosts a contest called ‘Doritos Crash the Super Bowl,’ a contest which showcases the best commercials. At least one fan-made commercials are guaranteed to air as one of the Super Bowl commercials on game night. This year, the winner of the contest happens to be former Jefferson student from the 90’s, Scott Zabielski. In his hilarious and crowd pleasing advertisement, a man is on a plane and is trying to scare all the passengers from sitting in the middle seat next to him by his weird quirks. After seeing an attractive woman, he uses a bag of Doritos to lure her into sitting next to him on the plane, but is displeased when he discovers that she has a child. This advertisement was definitely clever, without being offensive or crude, and serves well as first place as our top Super Bowl commercial.

Last year, beer company Budweiser’s ad spot “Puppy Love” highlighted the inseparable friendship between a playful yellow Labrador puppy and an adorable Clydesdale horse. The heart-warming commercial became wildly popular, drawing nearly 57 million views on YouTube. Released as a sequel, the equally “aww”-inducing “Lost Dog” features a more dramatic storyline of a lost dog in trouble and a horse that would do anything to help its best friend. USA Today ranked this ad as number one on its Ad Meter, marking Budweiser’s second win in a row.

“What does it mean to do something ‘like a girl’?” asks Always, a brand of feminine hygiene products. The powerful “#LikeAGirl” ad confronts the subtle sexism that pervades society, calling attention to the way people think about what it means to act “like a girl.” This ad contrasts how adults, young boys and young girls perceive the phrase of doing something “like a girl.” According to the executives at Global Always, girls begin to lose confidence in themselves when they reach puberty. This ad is inspiring and empowering, a breath of fresh air when it comes to female-centric commercials that usually feature perfect housewives or sultry women.

Unfortunately with the rise of social media platforms, cyber-bullying hurts, discourages and negatively affects people. In Coca-Cola’s #MakeItHappy ad, a spill of the iconic soda inside a server room transforms hurtful words into positive ones and encourages people to think twice about cyber-bullying. By calling attention to this issue, Coca-Cola effectively uses the 30-second time frame to make a strong statement. In addition, the computer graphics of this ad is gorgeous, especially the glowing lights that emerge from people’s servers and the “1”s and “0”s that make up the Coca-Cola logo, adding to the technological motif.

Through Feb. 14, McDonalds is hosting a “‘Pay with Lovin’” initiative to spread love among their customers. They will be picking random customers to receive a free meal for the cost of showing compassion. From big hugs with one’s family, to a phone call to one’s mother telling her one loves her, this initiative in action nearly brought us to tears with its heartfelt connotation. McDonalds effectively promotes their initiative with a genuine commercial that will be sure to bring a smile to your face and tears to your eyes.

Actress Mindy Kaling of “The Mindy Project” and actor Matt Damon join forces for a hilarious commercial by Nationwide. Though Nationwide received a lot of flak for airing a depressing ad narrated by a dead child to bring attention to preventing childhood deaths, this other 45-second ad provided laughs by the perpetually funny Kaling. After being snubbed by a taxi yet again, Kaling begins to do things that she would do if she were invisible: sitting naked in a park, getting a wash in a carwash, trying to kiss Matt Damon.

In this year’s Super Bowl commercial, Dove Men attempted to support the notion that ‘care makes a man stronger,’ promoting their new line of Dove Men +Care. The whole video is a montage of men showing their compassion and love for their children, as an initiative to promote kindness in men. This touching advertisement definitely stands out and highlights a soft spot in men. For its positive connotation and depicting, ‘Real Strength’ has earned its place in our top 10 Super Bowl ads.

There seems to be a recurring theme of focusing advertisements on men and dads this year, and what being one means. This one took a touching storyline with the development of a relationship between a man and his daughter, and how the girl’s dad has cared for her throughout the years. Throughout the advertisement, the daughter grows with the father at her side and eventually goes off with the military, a sight that tugs at the heart-strings. This commercial cleverly incorporates a Toyota car several times– going to pick her up from her school dance and driving her to the airport among others.

The Super Bowl commercial by Mophie, a company that specializes in cell-phone accessories, begins with the end of the world. Objects in a room float to the ceiling, fishes rain down from the sky and a hurricane threatens Nebraska and a blizzard in Africa. However, as everyone faces the apocalypse, there’s a humorous and witty twist at the end that makes this commercial worth watching.

Snickers commercials are famous for involving a cranky and hungry person in the wrong situation who immediately transforms into the right person once they bite into the nutty goodness of a Snickers bar. In this Super Bowl ad, angry and hungry Marcia of “The Brady Brunch” is actor Danny Trejo, known for his action movies, recreating the episode when Marcia was hit Steve Buscemi, who portrayed Jan Brady on the show. Providing the laughs with a hint of nostalgia for the iconic show, this ad was a great throwback, delighting both new and old fans of “The Brady Brunch.”