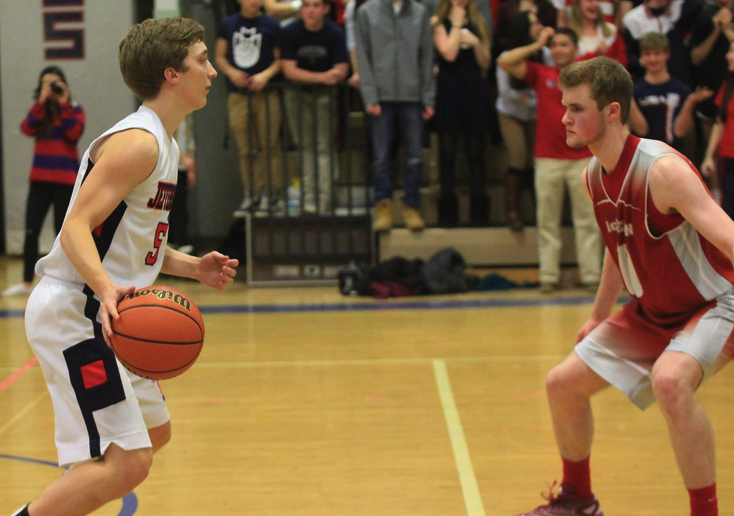 Seniors on the varsity basketball team who participated in the program through their junior year have already experienced the difficulty of balancing both grades and commitment to the team. Senior Addison Dunn faces a Mclean opponent on Jan. 9 victory over the highlanders.

As the winter season comes to a close and registration opens for spring sport tryouts, many Jefferson juniors will be faced with a difficult decision- to continue a sport that many have reached near mastery at from freshman and sophomore seasons, or to focus on their grades during the hardest quarter at Jefferson.

For many, playing a colonial sport has provided an outlet for stress from Jefferson’s academic rigor. However, a trade-off exists between time spent at practice and games over time at SAT classes. The third quarter of junior year can perhaps be one of the most critical times to find academic success as a high school student, and athletes must consider this before they commit to a team which will depend on them.

“I really enjoy playing baseball and it has sort of acted as a stress reliever for me,” senior Sahil Laheri, a member of Jefferson’s varsity baseball team, said. “During junior year, although it took some time away from studying, I stayed committed because it was a break from studying and something I genuinely enjoyed.”

Playing on a Jefferson sports team will take away a significant portion of every athlete’s afternoon and evening. For example, basketball games can run well past 9 pm several times a week, and members of the swim and dive team have to factor transportation to and from aquatic facilities into their already-long practices. Jefferson’s runners, many of whom train year-round from cross country to spring track, frequently go on overnight invitationals, which often take up an entire weekend.

“Swimming takes up the time I would have been spending on Facebook,” junior Tai Kao-Sowa said. “Between sophomore and junior seasons I pretty much kept my study habits exactly the same, except I don’t have as much free time this year.”

For some students, choosing between sports and academics was never a choice. As a freshman, junior Nathan Chuwait knew he would play for the Jefferson golf team because he had been playing the sport all his life.

“I’ve been playing golf for a really long time, even before coming to high school, so I’ve learned how to manage my time over the years,” Chuwait said. “I definitely have to sacrifice time watching TV shows or hanging out, though, because then I really wouldn’t have time to finish anything.”

As many senior athletes can confirm, playing a sport at Jefferson has significant benefits despite the time commitment. Student athletes choosing whether to continue their sport should consider the impact that taking a season off will have on their team, but also consider the qualities they will bring to the team if they should play. If the stress of junior year turns out to be overwhelming, most would not recommend adding another activity to the mix. On the other hand, sports at Jefferson can often better concentration and relieve stress, as senior Jennifer Fang experienced through her junior year.

“During gymnastics, I’d never think about homework so it was definitely a distraction in that way, but the really late and really long practices made me plan ahead and do my homework and studying earlier,” Fang said. “It was kind of a sacrifice, time-wise, but it was definitely worth it and I encourage more TJ kids to play sports.”