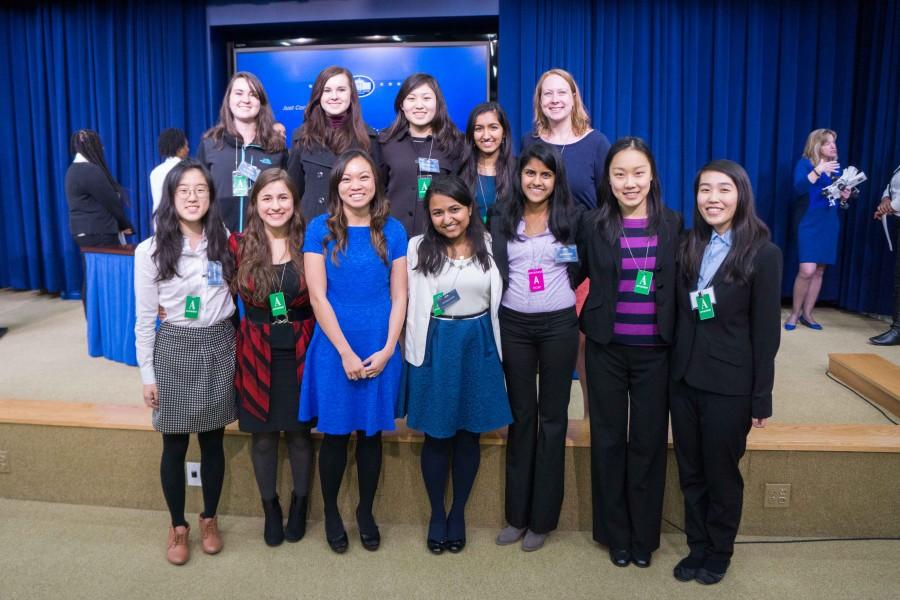 TJ Media met Kathy Pham, who works for the United States Digital Service and was a Guest of the First Lady at the State of the Union, at SoSTEM.

On Jan. 21, the TJ Media seniors of tjTODAY and Techniques and adviser Erinn Harris traveled to Washington, D.C. to attend the third annual State of Science, Technology, Engineering and Math Address (SoSTEM).

Approximately 130 elementary, middle and high schools students from Washington, D.C., Maryland and Virginia attended the event, which was held in the Eisenhower Executive Office Building. The SoSTEM speakers included prominent members of the White House and governmental agencies, such as Megan Smith, U.S. Chief Technology Officer; Charlie Bolden, Administrator of NASA; Jo Handelsman, Associate Director for Science at the Office of Science and Technology Policy (OSTP); Ellen Stofan, Chief Scientist at NASA; and John Holdren, Assistant to the President for Science and Technology and Director at OSTP.

The presenters encouraged students to pursue their passions in science, technology, engineering and mathematics (STEM) and be open to exploring new things.

One highlight of the event was a live Q-and-A session with NASA astronauts aboard the International Space Station (ISS). The astronauts answered questions about their careers and living in space, and they also demonstrated physical feats that cannot be accomplished on Earth, such as floating upside-down.

“I thought that being able to talk to the astronauts was really cool,” senior Nandini Radhakrishnan said. “I’ve talked to astronauts when they come back from missions, but seeing them in space and what they can do in the anti-gravity environment was even better.”

The TJ Media seniors were also able to hear from a panel of women in STEM. This included women with interests and areas of expertise ranging from aerospace to computer science to climate change. The panel speakers discussed their career backstories and offered advice for students, both male and female, interested in pursuing STEM.

“I really appreciated the opportunity to attend a STEM presentation in Washington, D.C.,” senior Stav Nachum said. “I found it fascinating to hear from astronauts at the ISS, as well as women in STEM, who showed me the hardships I might face in the future.”