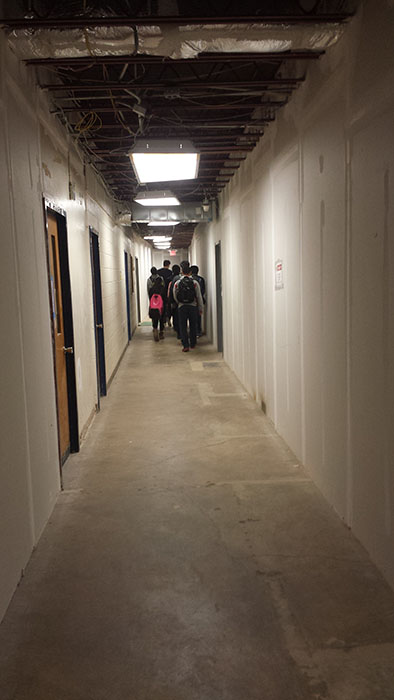 The new hallway is now the only way to get to the tech labs from the auditorium lobby. It is used by students, faculty and administrators, in addition to the construction workers.

“Once the new research labs were turned over, the plan was to block the hallway from the old Clinic to the elevator on the first floor,” assistant principal and construction liaison Shawn Frank said. “This would have meant that students getting to the research labs would have to come around the building from Entrance Eight.  I worked with Design and Construction to create a path between the construction to shorten the time to get to the new wing from Entrance Eight.”

The hallway’s lack of windows, twists and turns and unusual layout separate it from the other school hallways. Teachers are also responding to the unique appearance of the hallway.

“I like to call it the gauntlet of doom,” school counselor Kerry Hamblin said. “Well, you know there are no windows, it’s dark and you aren’t really sure where you’re going.  It’s twisty and turning, there could be physics equations at the end.”

Many new rules were established for this hallway, such as no walking backwards, texting, eating, walking with three or four people across, or walking on the left side of the hallway.

“This hallway will have a lot of traffic and students should keep moving,” Frank said. “Students should try to stay to their right while walking so that they don’t bump into one another.”

The morning video announcements also did a story on the new hallway. They made sure to state its special rules and importance to school travel.

“The morning announcements were covering the new hallway because it is very important that people walk and keep moving,” junior Kaila Stein said. “That is the only way to get from the tech labs to the audlob and people need to make sure they don’t obstruct it.”

Some students have noticed the sharp corners and surprising length of the hallway.

“The hallway is a bit cramped.  It’s like walking down a long, white corridor,” freshman Evan Lin said. “The length of the hallway is somewhat surprising since you don’t know when it’ll end.”

One student commented not only on the hallway’s unique appearance, but the need to keep moving when you are traveling through the hallway.

“I think the tunnel itself is really cool and would be perfect for a haunted house or something, with all the doors, but it can frustrate someone like me who uses it so much because people walk really slowly through it,” senior Anant Das remarked.  “One time someone literally just stopped walking in front of me and I almost toppled over.”