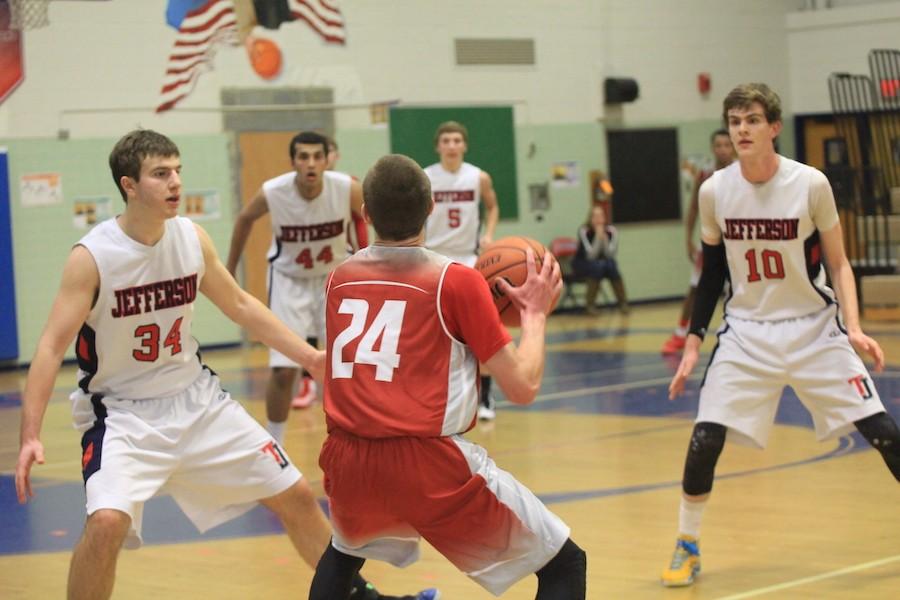 Seniors Seth Jaffe and Ryan Morris try to block a player from the McLean Highlanders.

It was the final minute of the game, and the Jefferson Colonials were tied with the McLean Highlanders at 43-43. With only five seconds remaining on the clock, all eyes were glued on senior Ryan Morris as he raised his arms to shoot the ball behind the arc, risking time in hopes of scoring a three-pointer. The Jefferson crowd silently raised their arms in anticipation as the ball arched forward and swooped into the basket with a satisfying swish, bringing the score to 46-43 with Jefferson in the lead.

“This is our house!” Thunderous cheers from the Monticello Maniacs erupted. On Jan. 9, Jefferson clinched a close home win against McLean High School with a final score of 46-44, bringing the record of the team to four wins and seven losses.

“Since we’ve already lost a few close games this season, it feels so good to get an official win so everyone can see how much better we are this year,” senior Addison Dunn said. “Not to mention getting that kind of win in front of so many fans pumps up the team. It was incredible to hear them cheering throughout the close game.”

Jefferson’s defense played steadily, especially as the score danced between the two teams continuously throughout the game. Though Jefferson was down by seven points at end of the first quarter, the team took the lead in three points at the end of second and one point at the end of third.

“It feels great to be undefeated at home,” senior Seth Jaffe said. “We feel comfortable playing close games and are used to the pressure.”

Also making a strong presence were the Monticello Maniacs, the Colonials’ fanbase, as they cheered loudly in support of the boys.

“It is incredible seeing so many fans come out to scream their heads off for our team every game“ senior Sam Veroneau said. “The atmosphere is incredible and I especially like it when we are all singing ‘Twinkle, Twinkle Little Star.'”

In addition, seniors Sharan Arkalgud and Morris both scored the highest amount of points this game, 15 and 10, respectively. With the next game against Marshall High School scheduled on Jan. 13, members of the team will continue to train and aim to take home another win.

“We, as a team, feel great about this win because up until now we have lost all our games by just one or two points,” Arkalgud said. “Yet this time a close game went in our favor and we won by a few points. This game was a result of hard work and proves that we can be competitive in the region and we can’t wait for the next few games to continue to prove this fact.”