“The Hobbit: The Battle of the Five Armies” concludes the Middle Earth journey 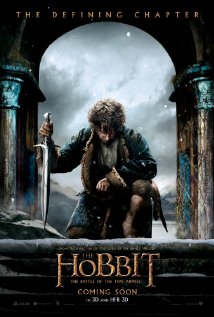 "The Hobbit: The Battle of the Five Armies" was released on Dec. 17, 2015. Photo courtesy of http://www.thehobbit.com.

In the end, we find ourselves once again at the beginning, having travelled there and back again in the company of elves, dwarves, dragons and hobbits. Yet this journey did not start with the first “Hobbit” film, but rather 13 years ago, in December of 2001, with the unveiling of “The Lord of the Rings: The Fellowship of the Ring.” Now that the final installment of “The Hobbit” has been released, the entire franchise has officially, and unfortunately, come to an end.

As the finale to Peter Jackson’s epic Tolkien odyssey comes to a close, “The Hobbit: The Battle of the Five Armies” follows Bilbo (Martin Freeman) and the dwarves one last time, as they attempt to reclaim the dwarves homeland in The Lonely Mountain. Full of hardships such as Thorin Oakinshield (Richard Armitage) succumbing to the Dragon Sickness that plagued his grandfather before him and the people of Laketown being requiring a new home after their town is destroyed by the dragon, Smaug (Benedict Cumberbatch), this final installment is filled with several interesting and captivating different stories. And, of course, as the title of the film suggests, the final battle for the mountain finally takes place as the dwarves, elves, humans, goblins and orcs come to sword and bow point.

Though the film was insulted by many fans of “The Lord of the Rings,” especially those who were offended by some of the liberties that the movie takes from the original story, I found this final installment to be a thrilling and interesting film that gave a captivating conclusion to the franchise. There were countless references to “The Lord of the Rings” trilogy, that seemed to be a final salute to the fans and also several wonderful effects that made the final battle in Middle Earth come to life on the screen.

Most importantly, though, there was the irreplaceable Martin Freeman, who has made the role of Bilbo Baggins his own and created a phenomenal character that all fans can enjoy watching. With his flustered perseverance and tirelessly quizzical expression, Freeman causes you to truly miss Bilbo when he is off screen, which is often during this film. Following Freeman’s impeccable example, the other actors created astonishing characters coupled with flawless acting that truly makes the film incredible.

The film is a heartbreaking one both in terms of plot and in terms of it being the end of a series that truly was the childhood of many people in our generation, myself included. Rather than insulting the flaws that many people seem to see, I have embraced the faults and allowed myself to appreciate the film. While sometimes not accurate and exactly as the novel was, I found the film to be a refreshing and comical take on the heartbreaking tale that is “The Hobbit.”