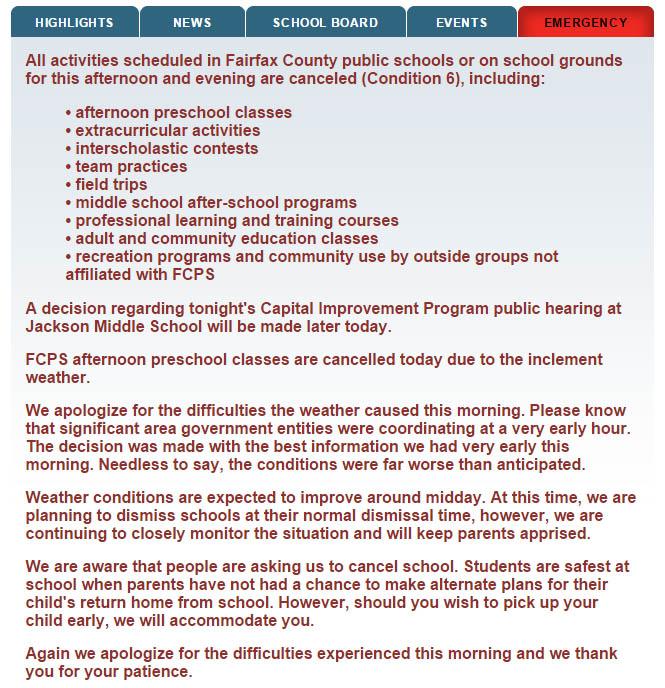 When one county from Virginia starts trending on Twitter worldwide because of the dangerous conditions students are facing on their morning commute, clearly Fairfax County Public Schools (FCPS) made an error with their decision. With last year’s outstanding totals of snow days that led to an increase from 3 to 10 snow days, it’s no surprise that the administration is a little skeptical this year.

Last year, FCPS went so far as to close school because of the temperature, which was surprising to many and difficult for working parents. But with the first big snowfall of this year, it seems FCPS has dropped the ball. In order to prevent a repeat of last year’s ridiculous number of closings, they deemed it acceptable for schools to open this morning, at the expense of the safety of the students.

Many students didn’t even make it to school and stayed home, and so few buses arrived on time that at Jefferson, the day didn’t even start until 9:30. Accidents and road closings occurred all across the county, and the Fairfax County Government Twitter even suggested staying off the roads, a feat impossible for the students who had to make their way to school.

Last year should’ve been a lesson to Fairfax County to be more prepared and less willing to jump the gun, but while they headed the second lesson, we were woefully unprepared for this storm. The roads weren’t even salted this morning, but across the county, according to the Capital Weather Gang, the weather reporting team from the Washington Post, average snow totals seem to be around 4 inches and the temperature isn’t going to rise above freezing until as late as Friday, making it doubtful with the untreated roads that the conditions are going to improve. Although the weather is much worse than expected, even the possibility of snow should’ve been enough to prepare the roads.

FCPS is getting so much flak due to the lack of safety of the students that now even the remotest possibility of snow is going to warrant a cancellation. Instead of being more conservative as was clearly the goal of this decision, they will have to be even less conservative than last year to avoid the parental outrage that occurred today. But this isn’t a solution either. What FCPS really needs to do is find a way to make solid decisions that put the safety of the students first, regardless of public opinion.