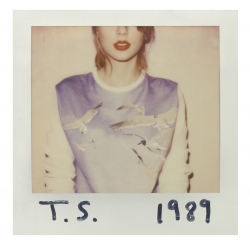 Although virtually unknown before its release, artist Swedish artist Tove Lo spiked to stardom with her catchy yet heartfelt song, “Habits.” Her debut album was released in March 2014 with both “Habits” and a remix of the song, “Stay High,” and both versions achieved amazing popularity. “Habits” has the content of a traditional breakup song, but a bit more graphic, which makes the song even more haunting and beautiful. On the other hand, the Hippie Sabotage remix, “Stay High,” brings a dance element to the song, making it a hit both for casual listening and party music. Lo’s unique voice matches perfectly with the attitude of the song to give it a somewhat eerie, desperate tone.

Revolutionary in its outrageous message, “Anaconda” was fearless rapper Nicki Minaj’s biggest hit yet. “Anaconda” took America by storm, from the racy song cover to the catchy, almost-too-far rapping. “Anaconda” takes some elements from Sir Mix-A-Lot’s Grammy-Award-winning 1992 hit “Baby Got Back,” including the hook and the backbeat, which help make the song even more familiar and catchy, but Minaj’s rap holds its own. “Anaconda” was Minaj’s bestselling song to date, hitting spot 2 on the Billboard Hot 100, beating out “Super Bass,” which song from her first studio album peaked at number 3. “Anaconda” is part of Minaj’s third studio album, “Pinkprint.”

12. “Never Been in Love” by Cobra Starship featuring Icona Pop

The band Cobra Starship is well known for its top hits, including “You Make Me Feel…” and “Good Girls Go Bad,” however with their single featuring Swedish duo Icona Pop they brought something entirely new. “Never Been in Love” has all of the elements of a High School Musical song–optimistic, catchy, and fun. Icona Pop brings the same teen-pop feeling that they have in their other hit songs, such as “I Don’t Care,” and Cobra Starship echoes it. Fun to dance to, sing to, or just listen to, “Never Been in Love” never fails to put listeners in a happy mood.

“Bailando” is a representation of what Enrique Iglesias is known for: dance music with a Latin twist. “Bailando” was released in four versions: the full Spanish version, with Cuban artists Descemer Bueno and Gente de Zona, the Spanish-English mix with Sean Paul, and two Portuguese versions with Brazilian artist Luan Santana and Portuguese artist Mickael Carreira, respectively. In the United States, the Spanish-English mix gained the most popularity. The song has a very catchy Latin beat that is easy to dance to, while Iglesias’s smooth voice makes it sexy. The addition of Jamaican Sean Paul adds a island vibe to the track as well that makes it feel more like laid-back party music.

Sam Smith began his rise to fame in Britain in 2012, but in 2014 his popularity spiked in the United States with his single “Stay With Me.” Previously, he was featured on Disclosure’s “Latch” and Naughty Boy’s “La La La,” which both became popular, but “Stay With Me” was his first solo track to rise to popularity. “Stay With Me” shows off Sam Smith’s talent for ballads, but its unusual content makes it especially worthy of notice. Smith sings of the emotional intimacy that comes with a one-night stand–one that most people do not admit to. Smith has an amazing voice and vocal range that make him one to watch in the coming year.

Following her hit “Shake It Off,” “Blank Space” was the second song to be released from Swift’s most recent album, 1989. “Blank Space” first captured listeners with its catchy tune and catchier lyrics. Swift sings of being a heartbreaker and moving in an out of relationships, but in a way that is sympathetic and relatable in its message. However, the real punch of “Blank Space” came in the music video released on YouTube, through which Swift is clearly trying to send a message. The lyrics of the song seem ridiculous along with Swift’s melodramatic attitude in the video–a defense against her traditional portrayal my the media as boy-crazy. Essentially, Swift takes on the role that the media has given to her, and shows just how hilariously insane that role really is. Swift continued this take in her performance of the song at the 2014 American Music Awards.

Vance Joy brings Indie Folk and pop together with his single “Riptide,” which was released on his 2014 debut studio album, “Dream Your Life Away.” “Riptide” shares similar qualities with other songs in the Indie Folk/Pop genre, including heartfelt lyrics and acoustic backgrounds, that make this genre interesting and make it stand out from standard pop. Joy, however, brought something new with the release of “Riptide,” which he wrote. “Riptide” has all the innocence of a first love, which brings a sort of mellow yet happy tone to the song. Joy also has a uniquely husky, interesting voice that matches with the acoustic background.

“Animals” is one of the 11 songs in Maroon 5’s 2014 album, “V.” Soon after the release of “V,” “Animals” became a standout song. Despite its somewhat controversial meaning and some of the deemed “stalkerish” lyrics and music video, there is no denying that “Animals” is surely a catchy song. Its wide vocal range and intense electric guitar gives it a very pleasing sound, if you ignore the lyrics. So far, “Animals” has peaked at number three on US Billboard Hot 100 and is currently in number eight. Definitely a popular song among the US, “Animals” has earned its place in the top songs of the year for its beautiful vocals, despite its contentious connotation.

6. “Rather Be” by Clean Bandit ft. Jess Glynne

“Rather Be” was released at the beginning of 2014, and is to date the most popular Clean Bandit (a British electronic group) song in the US. On the UK Singles Chart, the song debuted at number one and was the third-fastest selling single of 2014. It also gained much success in US when it peaked at number ten on the Billboard Hot 100. “Rather Be” definitely is unique from a lot of typical Billboard Hot 100 songs. Its lyrics portrays an infatuation with another, saying that there is ‘no place I’d rather be’. Its unique use of violin, a slow bass, and video game-style synth blips adds to the song’s pleasing sound. “Rather Be” has rightfully found its way into the top songs of 2014, along with a nomination in the “Best Dance Recording” category at the 2015 Grammy Awards.

5. “Say Something” by A Great Big World ft. Christina Aguilera

For lack of better words, Pharrell Williams’s “Happy” makes us happy. Originally written and performed by Williams as a single on the “Despicable Me 2” soundtrack album, “Happy” was later the lead single from Williams’ second studio album, “Girl.” “Happy” can be argued as one of the most popular and successful songs of 2014, reaching Billboard Hot 100 as number one for several weeks, and was put into Billboard Magazine’s #1 single for 2014. Along with the US, it also peaked at number one in 23 other states including the UK, Canada, Ireland and New Zealand. It has sold over 6.4 million copies in the US alone, and is named one of the best-selling singles of all time. Our favorite part of “Happy” is the overall vibe it gives out. Williams’ soothing soul voice really fits the dynamic of the song, and it can be enjoyed by just about anyone at any age. Along with receiving several nominations at the 2014 MTV Video Music Awards, it is also a top pick for the best songs of 2014.

Although New Zealand’s up and coming artist Lorde debuted her “Pure Heroine” album in 2013, it was still a popular hit throughout most of 2014. Lorde is a relatively new artist to the US, but she has already made it big here with her famous “Royals” song, and then later “Team.” “Team” peaked at number six on the US Billboard Hot 100, and already reached heights in many other countries such as Canada and Australia. Lorde has a very unique indie style that does not fail to please listeners. “Team”, although more upbeat than some of her other songs, is very soothing, with mellow backgrounds featuring the synthesiser, bass and snare drum. The lyrics also can resonate with a lot of listeners, through its sense of unity and relatability. “Team” definitely makes it into one of the top songs of 2014, with its nice vocals and positive vibes.

2. “Centuries” by Fall Out Boy

Unusual of the typical US Billboard Hot 100 songs, “Centuries” is a very raw rock song from the famous American rock band Fall Out Boy. It is the lead single for their upcoming studio album “American Beauty/American Psycho,” which is to be released in 2015. Released towards the later half of the year, “Centuries” became very popular very quickly. The single is now number 14 on the US Billboard Hot 100, and is still steadily climbing its way up.

Even though I’m not usually a rock fan, I still found this song extremely enjoyable. My favorite aspect of the song was their clever use of guitar, which really added to the dynamic of the song. Along with that, the gladiator-themed music video that was later released also fits well with the song and the combination is one to die for. It was an obvious choice that “Centuries” definitely deserved to be in the top songs of 2014.

There is no doubt that former country singer, Taylor Swift, was one of the most popular artists of 2014. One of her more memorable songs was “Shake It Off”, included in Swift’s studio album, 1989. “Shake It Off” definitely “shook” whatever was left of Swift’s country side, being a very upbeat, pop song. It is well known along side it’s fun and happy music video, and overall has very powerful vibes and musical style. “Shake It Off” debuted at number one on the Billboard Hot 100 chart soon after its release, becoming Swift’s second number-one single in the US. The catchy, upbeat dance song is filled with positive energy, and makes listeners feel overall happiness, which is probably why it has become so popular. “Shake it Off” is currently number 9 on the Billboard Hot 100, but I don’t think Swift minds much because her other popular song, “Blank Space” happens to be number one. “Shake it Off” was an obvious choice to be nominated for Record of the Year, Song of the Year and Best Pop Solo Performance at the 2015 Grammy Awards, and in our top songs of 2014.