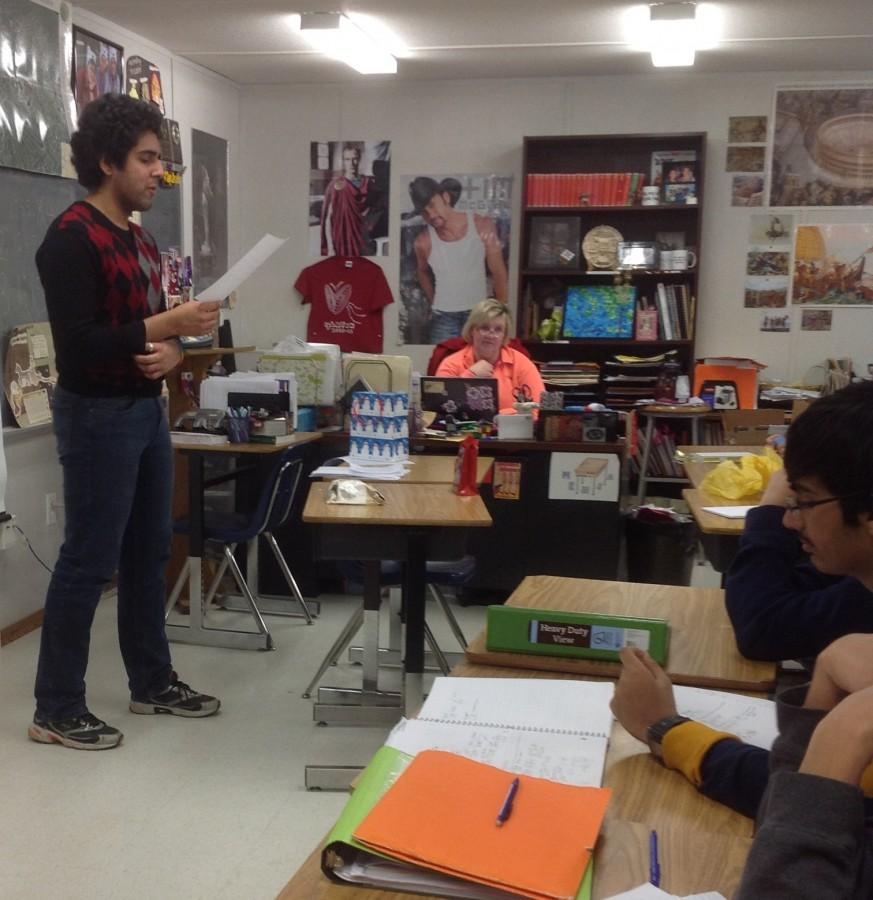 Senior Anant Das reads his poem to the class during Saturnalia celebrations.

With a two-week break just around the corner, most students are preparing to spend traditional winter holidays with their friends and family. However, the Latin department is planning celebrations for one of the more unique holidays of the wintertime, Saturnalia.

“I like how I can get to know other students in my class better,” junior Ally Scholle, a student currently taking fourth level Latin, said. “Sometimes it’s hard to learn more about everyone else during class, but we learn a bit more about everybody during Saturnalia.”

Celebrated by the ancient Romans in times before Christianity had taken shape in Old-World Europe, the holiday had become a symbol of dedications to the God Saturn in hopes of a bountiful harvest for the next year. In addition, Saturnalia has come to be known as the celebration of the winter solstice, as well as a festival of lights.

This year, to follow Jefferson Latin tradition, all Latin classes held in class gift-exchanges in which the giver of the gift would address the recipient in the form of poetry. The class spent the last Latin class period before winter break guessing the recipients of each gift, whose names were concealed by riddles. In accompaniment with the gift exchange, titled “Secret Saturnalia,” Latin students in all classes contributed to a potluck of sweets to enjoy during the class period.

“I really like giving someone something that they really like,” Scholle said. “It’s really nice to see people appreciate the gift that you picked out especially for them.”

All festivities aside, Saturnalia celebrations also serve the purpose of educating fellow classmates about various aspects of Roman history. Some of the winners of the poetry contest aspect of the celebration had poems which were most informative, funny or creative, and which could teach the rest of the class about an ancient Roman figure or event.

Nigam wrote her poem about the Trojan hero Aeneas, written for a fellow classmate with that same Latin name. In the poem, she references Aeneas’ great triumphs and failures as he journeyed to found Rome, a classic tale studied by all AP Latin students.

“Someone in my Latin class wrote a poem that was really cool and unique,” junior Shirali Nigam, also an AP Latin student, said. “He sang a parody of Meghan Trainor’s ‘All About That Bass’ to teach the class about the story of Icarus.”