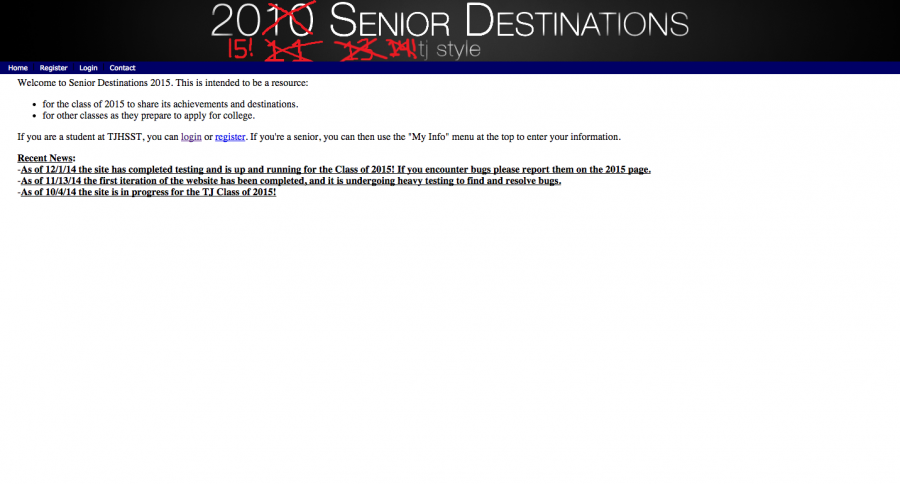 On Dec. 1, tjDestinations for the Class of 2015 opened as a resource for Jefferson students.

On Dec. 1, tjDestinations, a website where seniors at Jefferson share their scores and prospective colleges as well as the results from said colleges, became available to the public. Since then, several seniors have taken the incentive to fill out their information.

tjDestinations was created to share college acceptances, scores and information with other seniors who are applying to the same schools and with underclassmen who are looking for information about colleges they are considering applying to. Using this website, underclassmen can see about where they are in terms of which colleges they can get into with their given scores.

“I think tjDestinations is a really great resource because it gives me a good idea of where I stand and what schools are reasonable as reach, safety and match for me,” junior Aly Luckett said.

The information that can be shared with the public includes gender, race, grade point average (GPA), Scholastic Aptitude Test (SAT) in both 2400 and 1600 scores, SAT subject tests, advanced placement (AP) scores, honors or extracurricular activities and applied and accepted colleges. While some seniors placed all of their information and scores, others were a bit more apprehensive in terms of which information they put up for the entire school to see.

“I consider my GPA and SAT scores pretty personal,” senior Angela Ma said. “Also, it’s not like the stats make a big deal. You’re not getting into college on stats alone, anyhow.”

Since October, senior Puneeth Uttla began sporadically working on the code he received from alumni to build the website, hoping to help underclassmen as they begin the college process.

“It was always a useful resource for me during the past three years. When I was looking at the people from the years, I looked at the stats from alumni and for the colleges I was aiming for, it was cool to know what their standards were,” Uttla said. “I could set goals for myself.”

Though there is a chance that student could inflate their statistics to look better, Uttla believes that it’s all up to the students to be honest.

“They’re not really cheating anyone, but they’re lying to other people,” he said. “The system allows it but it’s not helping anyone.”

However, underclassmen still find the website beneficial, especially in seeing the statistics of their peers.
“Since we’re usually compared to other TJ kids in the application process, it helps to see stats from other kids at TJ and not like nationwide averages and statistics that don’t help as much,” Luckett said.