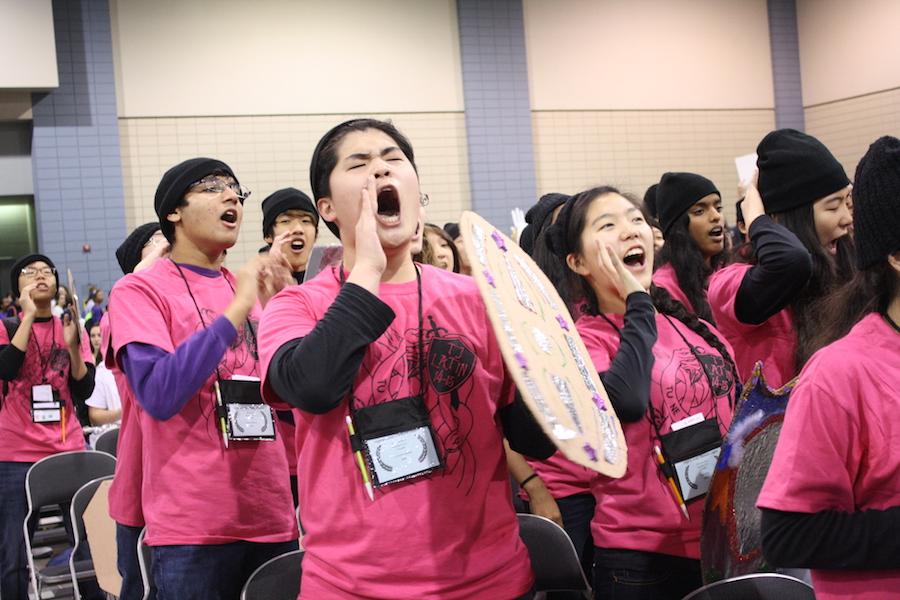 Holding a cardboard shield, junior Junyoung Hwang shout along with his peers during the Spirit Contest.

Flashing cardboard shields decorated with aluminum foil, pompoms and glitter, the students in Jefferson’s Latin program cheered so loudly that throats were hoarse by the end of the spirit competition at the annual Virginia Junior Classical League (VJCL) Convention. Held in Richmond, Va. from Nov. 23-24, the 2014 VJCL Convention allowed passionate Latin lovers to test their knowledge with exams, discover more about the ancient culture and bond with others across the state.

“It was a lot of fun hanging around with my friends, the upperclassmen and with Latin enthusiasts from all over the state,” sophomore Christine Wang said.

This year, the overall theme was taken from Vergil’s famed “Aeneid”: “Tu ne cede malis sed contra audentior ito,” which translates to “Yield not to misfortunes, but advance all the more boldly against them.” Taking this to heart, Latin Honor Society (LHS) officers brainstormed to apply this theme to the myth of Perseus and Medusa and created related cheers and props.

“We had to pick a theme that went along with the idea of becoming stronger despite the odds, and someone also had the idea of Nicki Minaj’s “Anaconda” so we thought Perseus and Medusa fit both of those nicely,” senior Edith Zhang said. “We always need to consider a lot of things like spirit props and t-shirts, and we had some good ideas for both of those.”

Representing Medusa, the monster with snakes on her head, several officers wore green hats decorated with green pipe cleaners and led cheers for the rest of the school, who had created cardboard shields and wore a black beanie to represent Aeneas’s cap of invisibility.

In addition, seniors Rachel Chon, Bobbie Sheng and Jeong-In Seo designed the Latin t-shirt, drawing inspiration by the myth. They also included a calculator on the back to maintain the tradition of incorporating something math or science related.

“Since the theme is about overcoming difficulties, we decided to portray the ‘difficulty’ that Perseus faced, which was Medusa, on the front of the shirt,” Chon said. “On the back, we showed the overcoming of difficulties with Pegasus, which was a symbol of triumph in the myth.”

Students attending the convention were required to submit two art projects, ranging from clay pottery to color pencils, and/or participate in oratories, either in English or Latin, in which they speak to judges about the theme or recite a speech.

In fact, junior Bradford Case got the opportunity to perform in front of the delegation during the award ceremony. He received Best in Show in Dramatic Interpretation for the boys advanced poetry passage from Vergil’s “Aeneid” where “Jupiter reassured Venus that her son Aeneas and his race had a bright and prosperous future – destined to become the Romans themselves – despite some recent troubles.” To prepare, he made sure to go over the lines carefully.

“I went word by word, figuring out how to act out everything and practicing each movement along with the rhythm of the poetry,” Case said. “Then I’d put together each line and go back and practice larger chunks to make sure I was getting the overall meaning across.”

In addition, exams taken throughout the first day allowed students to show off their knowledge on various topics, such as geographic, history, literature and vocabulary. Those who placed high enough could gain enough points, along with winning art projects, to be named as one of the top ten Sweepstakes award winners for every grade.

“I’m glad to have been given a chance to represent TJ, because the Latin program has given me so much,” senior June Ge, who received second place for 12th graders, said. “It’s very interesting to be able to compete alongside other incredibly talented people from the rest of the state.”

Overall, the Latin community had a great time fulfilling their passion and making new friends.

“The best part of convention is the mix of new and familiar things. Even though it’s so nice to do the same cheers that I know and compete in the same contests, I always try something new and meet someone new,” junior Ally Scholle said. “I think that has made Convention so much more exciting for me, because it’s never quite the same.”