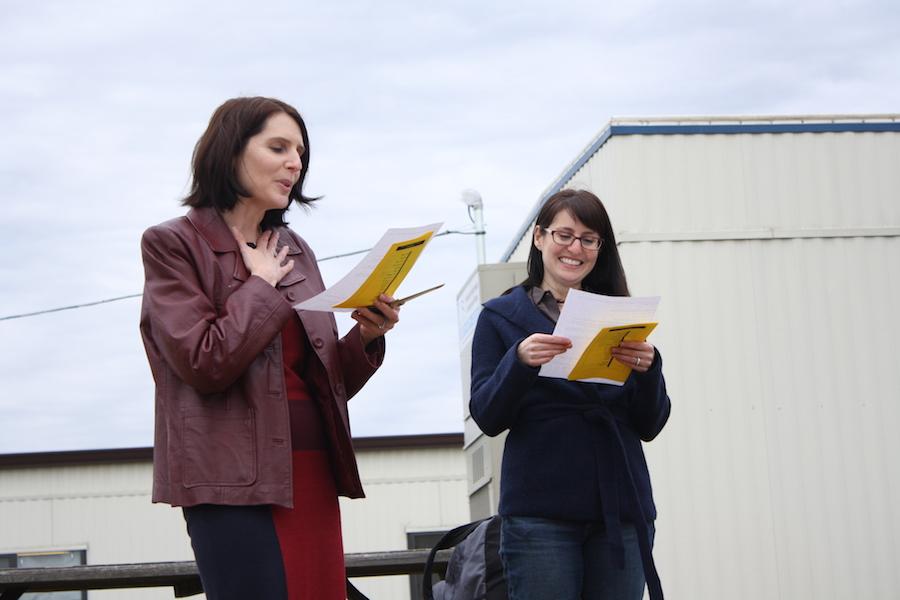 English teacher Denise Castaldo and history department chair Rebecca Schgallis welcomes the crowd during the Opening Remarks and Thanks.

Just 11 days after the renowned science department ribbon cutting ceremony that shut down most eight period activities in the building and invited Superintendent Karen Garza and a plethora of science teachers, the humanities department hosted an event of their own. Showcasing an immensely important and well-designed staircase, fondly named the Henry David Thoreau Stairway to Humanities, that connects the Weyanoke trailers to the bus depot and the rest of the building, the ribbon cutting ceremony demonstrated how monumental this addition is to their department.

“In the heavily trafficked northern Virginia area, we look for any way that we can to cut students’ commutes–the staircase allows students to cut across the bus depot parking lot, thus significantly lessening travel time to and from the back trailers and freeing up more time for Webassigns,” English teacher Denise Castaldo said.

The ceremony began with the Opening Remarks by history department chair Rebecca Schgallis and Castaldo, who thanked the burgeoning crowd of students, teachers and reporters for joining the publicized ceremony.

“We in Humanities feel as though all the major milestones in this renovation should be celebrated—the opening of the new multi-million dollar research wing, the spacious new common areas and, of course, these stairs that allow teachers in the Weyanoke trailers not have to walk a needless extra 300 steps to and from their cars each day,” Castaldo said.

In addition, students of Schgallis’s Advanced Placement (AP) U.S. History class tirelessly worked to decorate and prepare the staircase for the event. With an assortment of balloons and the regal red ribbon hanging from one edge to the other, the Henry David Thoreau Stairway to Humanities was the center of the celebrations and speeches.

“The stairs were decorated with the greatest solemnity, because we were all in such awe of the goal that the staircase represents, namely reaching a faraway goal without going through an arduous and roundabout process,” junior Ally Scholle said.

Also making an appearance were members of the highly-esteemed TJ Marching Colonials and Color Guard, who performed George Gershwin’s jazzy “I’ll Build a Stairway to Paradise,” arranged by senior Brian Junttila, during the Musical Interlude.

“It was truly a momentous occasion,” senior Alexis Jenkins said. “The Marching Colonials really outdid themselves and the color guard put on a show worthy of national television. The only things missing were non-alcoholic champagne and Dr. Glazer.”

“Even though these are mere temporary planks of wood, we wanted to seize perhaps our only opportunity for something on TJ property to be named for humanities pioneers,” Castaldo said. “We asked humanities faculty who was worthy of such a prestigious honor, and had over 50 nominees; we then had had another round of voting to establish the five winners.”

Just as the research wing will allow students to delve deeper into their senior research projects, this new staircase serves a vital purpose within the Jefferson community. Students will no longer have to trek their heavy backpacks all the way around the parking lot because of the easy access that this new staircase provides. A monumental step forward in the humanities renovations, which up until this point have remained untouched, this staircase will serve the students just as much as the new science research wing.

“It was a momentous event with a band playing, flags waving and students and teachers clapping,” junior Annie Abraham said. “This was a major step in the renovations and I’m thrilled that we had an appropriate ceremony to welcome it to the school.”