Mockingjay – Part 1 does not fail to impress 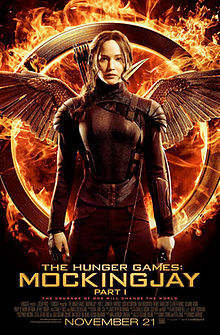 Going into the theater with low expectations after reading “The Hunger Games: Mockingjay” by Suzanna Collins, the ‘ooh’s and ‘ahh’s’ of the audience proved the movie to bypass the reputably boring book. Released on Nov. 21, “Mockingjay – Part 1” continues the story of Katniss Everdeen (Jennifer Lawrence).

After Katniss’ disruption of the Quarter Quell in the earlier movie, “The Hunger Games: Catching Fire”, she and Finnick Odair (Sam Claflin) were taken to District 13 where President Alma Coin (Julianne Moore) asked her to be their ‘mockingjay’ figurehead of the rebellion of the districts against the corrupt Capitol. Katniss is reluctant for a while, though, because she had never before wanted to start a rebellion. To make it worse, Peeta Mellark (Josh Hutcherson) had been captured and held captive at the Capitol, and was interviewed on television for Katniss to see, begging Katniss to be smart and keep the peace in Panem.

In order to drag the plot out long enough to have a second movie, the decision making process that Katniss went through was a long one before agreeing to be the mockingjay as long as the captured tributes were rescued as soon as possible. Even after the long process, I rarely felt that I was bored as I had been when reading the “Mockingjay” book. There was always something constantly happening.

After Katniss’ decision was made, though, the movie began to pick up even more speed through the intense encounter with District 8. After the bombing of the hospital that Katniss had visited, she becomes enraged with the Capitol and produces an intense video of her leading the rebellion.

A scene that really stood out was when Katniss and her mockingjay crew were resting by a river and she begins singing the song of the hanging tree, which her dad had sung to her as a child. Although the scene could have been easily taken out of the movie without disrupting the main plot, it added some flare to the movie and in return was one of the most powerful and memorable scenes.

Soon after, Katniss finds out that Peeta had been tortured and breaks down, so five volunteer soldiers, including Katniss’ long term friend Gale Hawthorne (Liam Hemsworth), fly to the Capitol to free the tributes. To Katniss’ surprise, the Peeta she had fallen in love with was not the Peeta she was reunited with.

The reunion of the two lovers had been intense in the “Mockingjay” book, and even though I had been fully prepared for the scene, it was still extremely shocking when it actually happened. Lawrence and Hutcherson blew me away in the last couple of scenes of “Mockingjay – Part 1” through their superb acting. Even though I had been disappointed at Hutcherson’s lack of screen time in the movie, the last scene of the movie made up for it. With his chaotic kicking and screaming, Hutcherson played his part extremely well and I couldn’t have imagined it to be any better.

As a harsh critic of the “Mockingjay” book, I had been pleasantly surprised at the flow and interesting flares that the movie brought. “Mockingjay – Part 1” has officially gotten me excited to see the next part, and leaved the audience thirsty for more.