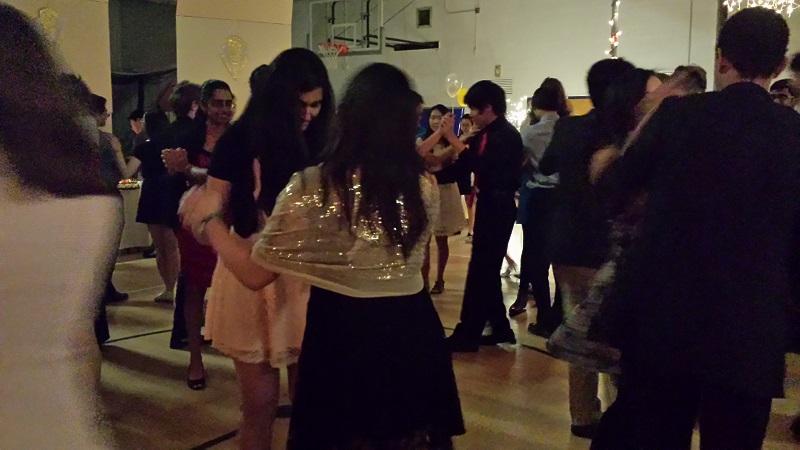 On Friday, Nov. 23, Jefferson students gathered in Gym 2 to talk, eat food, and dance the waltz for Jefferson’s annual Viennese Ball, hosted by the orchestra.

The Viennese Ball is a celebration of classical steps such as the boxcar and Viennese Waltz, and attire is considered semi formal, although some girls chose to wear full length gowns. The orchestra plays all of the waltz songs, with a brief interlude in the middle for swing dance while the orchestra takes a break.

In preparation for the Viennese Ball, the orchestra had to learn how to play the waltzes.

“We have about 11 waltzes that we play and we pick and choose them, so we ended up playing 9 of them. We spend about a week in class learning the music,” senior Luka Jelenak, who is co-president of orchestra and one of the primary planners of the Viennese Ball, said. “The difficulty is that we need to really listen to Ms. Bailey because there are colored markers for repeats, and she yells out what we need to do.”

Very few modern high school students are familiar with the Viennese Waltz. However, Jefferson’s Ballroom Dance Club offered lessons during both their weekly meetings for the two weeks leading up to the dance and right before the dance started. However, these lessons had slightly different focuses.

“We had sorted out that the president of ballroom, Andrea Tse, would help teach with our guest teacher Victor at the official waltz lesson before the ball, but our club lessons focused more on Viennese waltz which is a more elaborate style that our sponsor Dr. Gabor is actually quite proficient at,” sophomore Bailey Knight, vice president of Ballroom Dance Club,xx said.

There was a small problem with the lesson right before the dance, according to Tse, but it didn’t make a lasting impact on the night.

“The lesson was a bit quick because people weren’t fully admitted into gym 2 until 7:15,” Tse said. “However, it was great how a lot of people did waltz and were eager to learn.”