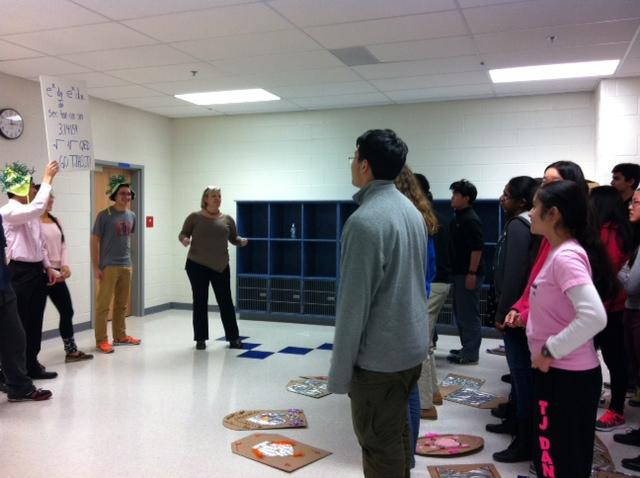 members of LHS run through the cheers for the upcoming convention with new attendees.

In the common areas surrounding the new upstairs wing during eighth period, excited shouts of “Rumble, ita vero!” and “TJ is red hot!” could be heard from down the corridor as members of Jefferson’s Latin program prepared for the upcoming spirit competition at the Virginia Junior Classical League (VJCL) convention in Richmond, Va.

The convention will take place from Nov. 24-25, and will allow students from across the state to express their love of the language through art competitions, a series of grammar and reading tests and oratory and storytelling events. Members of the Latin Honor Society (LHS) have been at work since September to organize events and put together cheers for the program to perform during the spirit competition.

“The quick deadlines have been a stressful part of preparation for this year’s convention,” senior Edith Zhang, the praetor magnus of LHS, said. “We don’t have as much time to deal with things like t-shirt design and to teach underclassmen the convention cheers, we have had to make many decisions quickly.”

In addition to meeting to practice the new cheers for the event, LHS board members and Latin teachers Christine Conklin and Patty Lister have organized several eighth period meetings to distribute more information and allow students to make their spirit props, Roman shields. The shields will be used as the Jefferson Latin program marches into the auditorium of the convention center to create an impression on the judges of the spirit competition.

Besides meeting during eighth periods, Latin students have been working at home on their art and oratory projects for the convention, as well as preparing for the tests they registered for in October. “My favorite part of preparing for convention has been creating my project, which is a drawing of Agrippa,” junior Junyoung Hwang said. “Drawing is one of the ways I can kind of relax, and it’s something I enjoy doing from time to time.”