TJ Drama delivers with impressive rendition of “The Front Page” 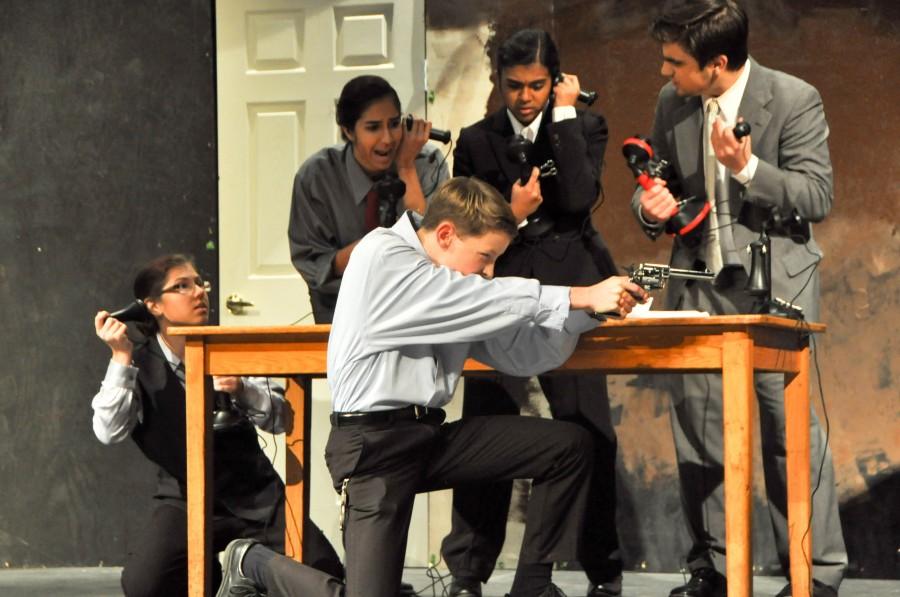 When a convicted murderer escapes a hanging, the politics, scandal and intrigue surrounding the incident are investigated by Chicago’s finest newspapermen in “The Front Page,” presented by TJ Drama on Friday, Nov. 14 and Saturday, Nov. 15. Starring sophomore Zara Batalvi and senior Misha Ryjik and directed by program director Vincent Pollet and senior Kira Becker, “The Front Page” offered a story of drama and scandal imbued with themes of prejudice, sexism and racism critiquing the 1920s.

“The Front Page” is the story of the Chicago Criminal Courts press room, home of reporters for The American, The Post, The Journal, The City Press, The Daily News, The Tribune and The infamous Examiner, all papers servicing the city of Chicago. The play opens with the news that Examiner reporter Hildy Johnson (Batalvi) is leaving the city and moving to New York to get married, which enrages The Examiner’s managing editor, Walter Burns (Ryjik). However, all this changes when convicted murderer Earl Williams (sophomore Josh Cummings) escapes from prison.

Johnson is unable to resist the powerful pull of the media world, and he is suddenly thrown back into the demanding cycle of reporting. In the process, he misses his train to New York and endangers his personal relationships, upsetting his future wife (junior Arjun Guidroz). However, none of this phases Johnson, as he is on the cusp of the “biggest story in the world”: an exclusive interview with Williams on the morning of Election Day, which would bring down the city’s corrupt mayor (senior Gavin Moore) and sheriff (junior Jake Gonzalez) once and for all. The only problem is hiding Williams from the other reporters until Tuesday morning.

The play got off to a slow start, with a long, drawn-out introduction to set the scene and fill in background details. The dialogue was also somewhat unfamiliar to the audience, because the play was originally written and produced in 1928. The actors delivered the witty, old-fashioned dialogue at a pace that made the lines seem almost ad-libbed – an uncommon and admirable feat. Unfortunately, the rapid-fire delivery and absence of microphones made for a slightly confusing opening scene.

When the plot began to pick up, the pacing and entertainment factor of the play definitely increased. The actors became more impassioned, and lines that previously seemed somewhat awkward and forced rolled off their tongues as the heat increased on stage. By the second act, there was an edge to the play that had audience members on the edges of their seats.

There was also an additional element of humor introduced to the play, which was added through the casting and not present in the original rendition. The drama department ran into some copyright issues in the weeks leading up to the show; they had altered pronouns in the script to make proper references, as many females were cast as male characters. As a result, the cast was forced to reassign some characters’ genders at the lastm minute, and some comical cross-dressing ensued. Guidroz did a fabulous job as Peggy Grant, despite learning he was going to play a girl the week before. His performance was comparable to that of John Travolta in the “Hairspray” movie: hilarious yet touching at just the right times.

Freshman Anyesha Majumdar entertained the audience as Peggy Grant’s mother, taking on a convincing, affected tone and giving just enough obliviousness to her character to put Johnson in sticky situations. Ryjik also gave a good performance, with his desperation to find Johnson – communicated early on through enraged phone calls – the highlight of the opening scenes.

Although “The Front Page” might not have necessarily been the best fit for TJ Drama and the student audience, the cast ultimately put on an enjoyable show, showing surprising depth by adding unprecedented layers to their rendition of the hit Broadway comedy.