Varsity cheerleading wraps up season after finish at District Finals 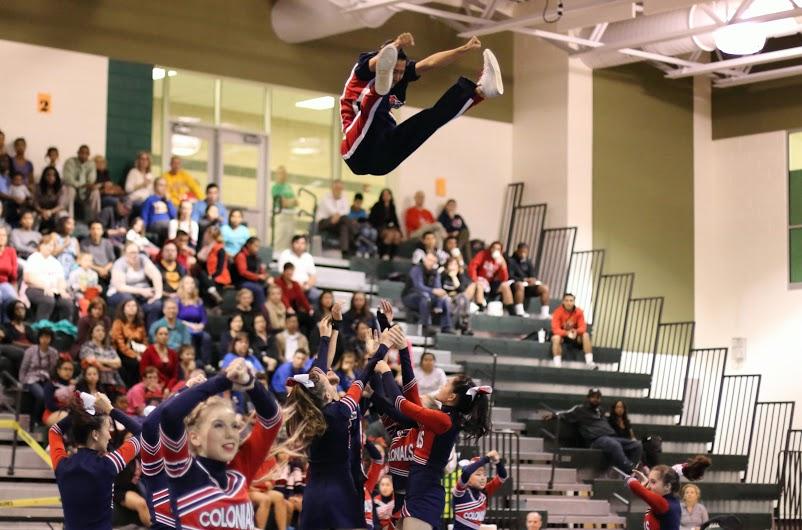 The Jefferson cheerleading team opened the routine at District Finals with the basket toss of senior Daniel Suh.

After their sixth place finish in the 5A North Region Capitol Conference Final Championships, the Jefferson cheerleading team celebrated the end of the season during practices between the last few remaining football games. The team did not advance to regionals because they did not place in the top four teams of the conference, so the season came to a close much earlier than in the previous year.

During the final competition, taking place on Oct. 20, the team scored 193.5 points from the judges panel in the second round, placing just three points behind Wakefield High School and six points behind Thomas Edison High School. Although the judges did not award the team full points, many members feel like the routine went off without a hitch given the team’s circumstances and performance at District Semifinals one week prior.

“My favorite moment of the season was at District Finals right before our last performance because we got extra time in the warm-up room before we performed and had some time to relax,” senior Alyssa Herbst said. “I think we all needed a moment to calm down and appreciate the moment, and it gave us some time for hugs and motivational talk.”

The team felt that having extra time to breathe before heading onto the mat was crucial to a good performance. At District Semifinals, many felt that performing first gave the team a disadvantage in relation to the other schools, as the team was rushed directly from processionals to the warm up room.

Now that the competition season has officially ended, the team has been using practices to work on stunts for next year’s competition, as well as teach the junior varsity team more advanced stunting techniques.

“When we all met up in the locker room before our last performance to do our traditional “rose exchange” and had our last team meeting,” sophomore Tatiana Bennett said. “We talked about how proud of each other we were and it was a really good way to end our competition season.”