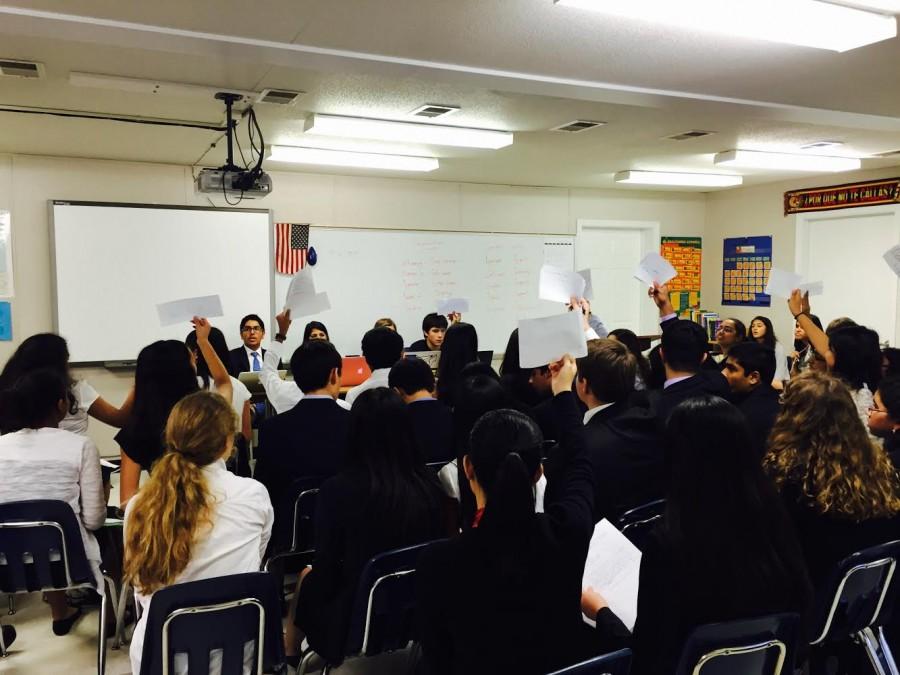 On Oct. 17, Jefferson’s Model United Nations club (TJMUN) held its annual mock conference. There was a sense of excitement and anxiety as delegates quickly sat down and raised their countries’ placards.

The purpose of the Mock conference was to allow new members of TJMUN gain experience in debating and cooperating in a committee to prepare for the upcoming national William and Mary High School Model United Nations Conference (WMHSMUN). Students represented their country as delegates and debated in committees run by the club’s officers.

“I think that our delegates were really well prepared for this conference,” junior Abhi Chadha, the chair for World Health Organization (WHO), said. “I was really surprised and impressed with the in depth research that a lot them did.”

In the committee session, delegates raised their placards and were chosen by the chairs to debate on these topics. In addition, delegates could motion, or request, for an unmoderated caucus, where representatives from the countries can work together to develop solutions to the issues. The delegates who show the best public speaking and leadership skills in the mock conference will be chosen to attend WMHSMUN in November.

Many students, like sophomore Shivam Kollur, were trying out MUN for the first time.

“The committee session was a lot of fun,” Kollur said. “Just being able to get a feel for how conferences work was really cool.”

TJMUN prides itself in their club member’s passion and support. The club will continue to teach new and returning members in preparation for upcoming conferences.

“In terms of dedication, TJMUN is really impressive,” Kollur said. “From the eighth periods filling up so quickly and the huge turnout for the mock conference, it’s easy to see that students are really dedicated and passionate for MUN.”