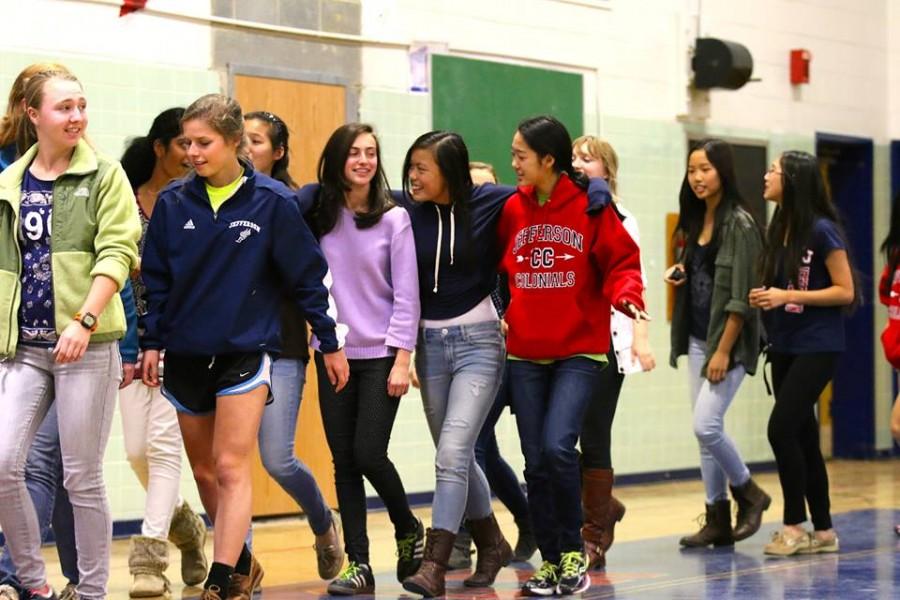 On Monday, October 27, during eighth period, students gathered in Gym 1 to honor the varsity fall sports team and to watch the exciting volleyball games between the teachers and the students.

The pep rally, hosted by the Student Government Association (SGA), started with the sports teams entering the gym and walking a full lap before the students went to sit with their respective classes. Some of the athletes joined hands and sang along with the playing pop music as they walked, whereas others climbed onto each other’s backs in an effort to increase the excitement that had already permeated the main gym. As the teams walked, the announcers called out the seniors from each team to honor their last year of playing on the Jefferson sports team.

“I didn’t think that it would be a lot of fun walking with the rest of girls cross country around the gym, but all the cheering from the audience and the excitement from my team members made the walk a really fun experience,” junior Maitri Patel said.

After all the teams had been announced, the SGA went to every bleacher and tossed colorful sunglasses into the stands revealing the “shady surprise” they had been talking about in the announcements for the past week. The sunglasses helped increase the thrill of the game as the suspense for the long-awaited volleyball tournament built up.

Seniors, juniors, and sophomores, all created their own teams to play an ongoing game against the teachers. This meant that the points the seniors, the juniors and the sophomores earned were added together to create the total “students” score. The team of teachers consisted of Alexandra Pou, Margaret Carpenter, Scott Campbell, Brian Grzelkowski, Karilee Schmidt and Thomas Rudwick.