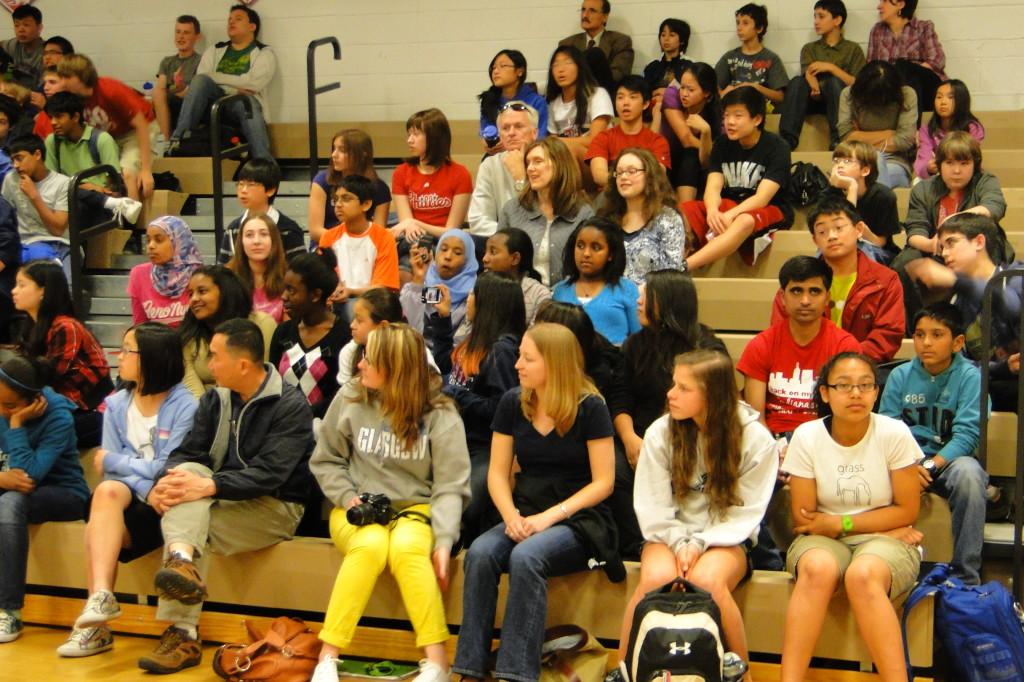 Freshmen clad in “Biyology” and “Hamlafadis” T-shirts crowded the stands and cheered for their favorite “Super Six” robots during eighth period on April 27.

IBET students competed throughout the week of April 23-27 both in their rotations and in semi-final rounds to come up with the six obstacle course finalists. However, the “Super Six” weren’t the only ones competing. There were also class finalists for three other categories: robot design (BeautyBot), power and speed.

The first winners to be announced were the BeautyBots. These robots were an extra challenge to make because they also had to attempt the obstacle course competition.

“The design process was very difficult. I changed my design quite a few times before I settled on a final one,” said freshman Mikaela Ruiz-Ramon, who created a Cheshire cat robot.

“He’s a platypus. He doesn’t do much, including go straight,” said Sophia Bennett, maker of Perry the Platypus, a character in Disney’s “Phineas and Ferb.”

In third place for BeautyBots was Julia Dunbar, who built the house from Disney-Pixar’s “Up.” Second place went to the Whatley robot, created by Daniel Choi. But the robot worthy of the grand prize was Rishub Jain’s design, the “Dr. Doolittle” time machine. This robot was made complete by an opening door, music and flashing lights.

The three fastest robots belonged to Andrew Jhu, Richard Oh, and the winner, Andrew Bolkhovinitov. The winner of the strength category was Peter Gunnerson.

The winner of all of Red Day IBETs was Vincent Billet, who faced off Blue Day’s Lucas Lin in the final round of the obstacle course points. Billet received a whopping 50 points, but the grand champion ended up being Lin, with 60 points.

In the gym on Friday were representatives of Thinkgeek.com, a website originating as a place for geeks to buy cool gadgets, that has supported Jefferson’s robot competition for three years. Thinkgeek personnel were throwing “stuffed diarrhea and food poisoning” into the audience, and at the end of the competition, they gave out other goodies including new Zig-Zag puzzles, which are made up of colorful pieces that can only be unlocked one way.

Also in the audience were middle school students from Glasgow, Lake Braddock and Mark Twain, invited by the TJ Diversity and Outreach Curriculum Team.