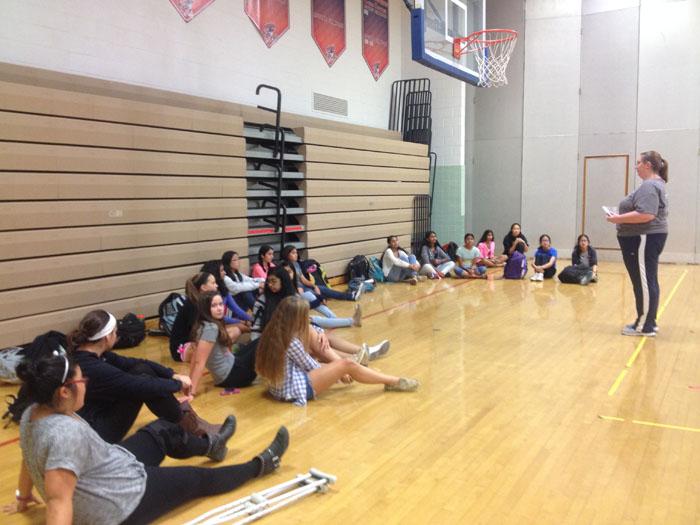 Women’s basketball held a preliminary interest meeting for freshmen and new upperclassmen to help them prepare for tryouts. The varsity coach Liz Reed discussed what they would need for tryouts and how they should prepare physically. Tryouts will be held Nov. 10-12.

“I was really excited to see all the freshmen come out to the interest meeting,” basketball veteran senior Julia Dunbar said. “This was definitely a better turnout than last year so we’re really looking forward to the coming season.”

The meeting discussed both physical preparation and required materials needed for tryouts. For physical preparation, Reed mentioned Saturday open gym and Green Days, which allow new players to work directly with the coaches on their technique. In order to tryout, potential team members must have a physical exam on file and complete the concussion education presentation, which is required for all athletes and their parents.

“I like to play basketball so I want to learn more and do team sports,” freshman Hyunjeong Cho said. “If I make the freshman basketball team and I like it then I want to continue, but basically I just want to try something new.”

Although basketball doesn’t start until November, the coaches decided it would be better to have a preliminary meeting earlier so they would be well prepared for the upcoming season.

“Our interest meeting this year was a little bit earlier than last year because we’re trying to get a few more freshmen out and get the word out among the younger players because we graduated so many kids last year,” Reed said. “So it was a really good turnout for October since we’re still a month away from tryouts.”