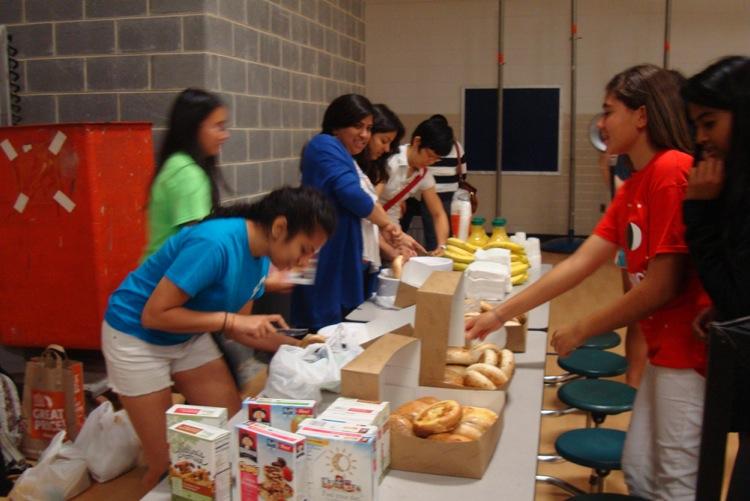 On Oct. 2, BigSibs and LittleSibs gathered in Gym 2 to begin the first session of its orientation. The orientation will be separated into four parts, with the next three sessions taking place each week.

Beginning with the first session on Oct. 2, the BigSibs program initiated a four-part orientation event that will continue every Jefferson Learning Community (JLC) for the next three weeks. Because of the sudden cancellation of the Sept. 6 orientation due to renovation and weather issues, the coordinators decided to replace the large-scale event with four JLC orientation sessions.

The first session was held in Gym 2, where the LittleSibs with last names Adam to Fritz met with their BigSibs, who were wearing uniform blue t-shirts. The students enjoyed a breakfast of bagels and cream cheese.

“Icebreakers and team building activities are planned for JLCs—we’re hoping cover some important facets of freshmen year, the role of BigSibs activities that will be held every month, and how to make sure you get the most out of freshmen year,” senior Sreya Atluri, one of the BigSibs coordinators, said.

The BigSibs and LittleSibs spent the rest of JLC engaging in multiple group activities, in which they sat around in large circles and discussed their favorite middle school and Jefferson memories.

Despite the multiple cancellation of events this year, the BigSibs program aims to enhance the interaction between the under and upperclassmen pairs that not only last in the beginning of the year but also continue throughout their entire four years at Jefferson.

“We will enforce our new mission of ensuring that BigSibs are involved throughout the year, and really foster a close bond between the BigSibs and LittleSibs,” Atluri said.