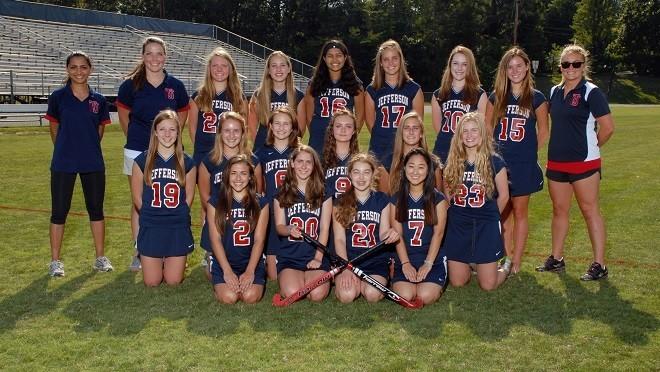 The girls' varsity field hockey team for the 2014-15 school year.

While the rest of the students at school were enjoying their day off on Monday Sept. 29, the girls’ field hockey teams were competing on the field. When the final buzzer sounded, however, the players left the field with another loss on their record. Both the junior varsity and varsity teams lost to Madison High School four to zero.

With the junior varsity record currently being one win, two ties and four losses, their season seems to be off to a bad start, but players firmly believe that their performance will improve as they become more comfortable with their new team. Similarly, with the varsity record is three wins and five losses, they believe that after the loss of their seniors there is some time for recovery, but their record will improve shortly.

“Even though we lost the game four to zero yesterday, I think that we played better this week than we have in previous weeks,” senior Carolina Hatanpää said. “It’s rough after we lost so many good seniors, but we are slowly becoming a more cohesive unit and I think our record will improve as the season progresses.”

The game against Madison showed the varsity field hockey team that their playing is consistent throughout the game, as two goals were scored in each half. As they aim to improve their game for the coming weeks in the season, at least they can see that they maintain a steady amount of energy and skill throughout the entirety of the game.

“Although I was out of the game yesterday with an injury, I watched from the sidelines and cheered on my team as they played one of their best games yet,” senior Alexis Jenkins said. “Though we have lost a few games and the teams only get tougher from here on out, I can only see us getting better.”