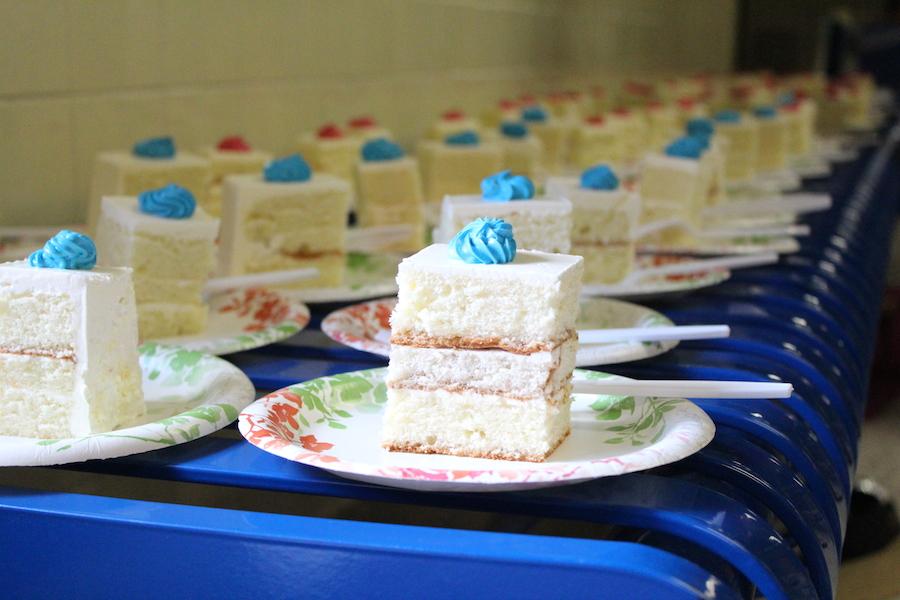 On Sept. 17, the Parent-Teacher-Student Association (PTSA) provided cake during break after Jefferson was recently ranked the best high school by Newsweek.

After news magazine Newsweek recently named Jefferson as the top high school in the nation, the Parent-Teacher-Student Association (PTSA) celebrated the achievement by offering vanilla cake to the community in the J-Lounge, Auditorium Lobby (AudLob) and courtyard on Sept. 17 during break.

The news came as a pleasant surprise after Jefferson was consistently ranked fourth by U.S. News & World Report for the past two years.

“Receiving the honor of being ranked number one and getting cake with it was simply great,” sophomore Suzie Bae said. “To be notified that your school is regarded by others as a high ranking school across the nation makes you feel even more privileged and thankful for TJ. PTSA providing cake to treat us was even sweeter.”

Senior Jenny Kim, in particular, was grateful that PTSA was willing to bring in cake for students.

“Our PTSA is so fantastic; our supportive parents are the reason that we were able to achieve this title,” Kim said. “We have one of the most involved, caring PTSA organizations in our county. The cake should be more for them than us students.”

Despite the excitement, some felt that the celebration was unnecessary, especially since the news magazines have different methods of ranking schools.

“It’s great that we were ranked number one again,” senior Bobbie Sheng said. “However, the cake was a little over-the-top since rankings are subjective.”

Overall, students were pleased with the honor.

“It is nice that we are the number one high school again,” junior Nathan Chuwait said. “It is great to know that the combined hard work of both the students and the faculty have paid off. I’m proud to say that I attend the best high school in the country.”