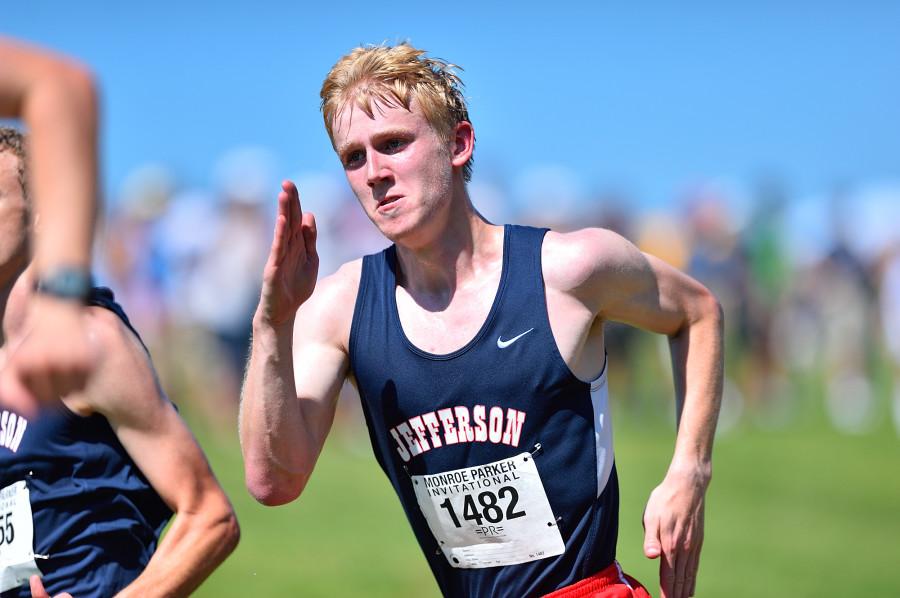 Senior Mitch Woodhouse sprints to the finish at the end of the varsity boys' race.

On Sept. 6, the Jefferson cross country team braved the sweltering, late summer heat to compete in the Monroe Parker Invitational. The 2.98-mile race at Burke Lake Park served as the first major race of the season, following a scrimmage and the PR Kickoff Invitational, a 2-mile season opener.

Both the boys’ and girls’ teams fielded runners in the freshman, junior varsity (JV) and varsity divisions at Monroe Parker. Thirty-four schools were present at the meet, including powerhouse teams such as Madison and Patriot High Schools and Lake Braddock Secondary School.

Sophomore Will Baxley had a standout performance, winning the JV boys’ race. With a time of with a time of 17:19, Baxley finished 40 seconds ahead of the second-place runner.

“I had never won a high school cross country race before, so I was very excited to break the tape,” Baxley said. “All the congratulations that I received from runners and spectators that I don’t even know made me feel like a celebrity. With the success that the team has been having so far, I think that advancing to the state competition is a reasonable goal for both the boys’ and girls’ teams.”

Some runners were hampered by injuries before and during the race, and others were affected by the scorching weather. However, many were able to beat the heat and even set new personal records (PRs).

“My race was honestly a miracle; I haven’t hit that close to my PR in a long time, and it was nice to see all of those summer miles finally paying off,” senior Katrina Junta, Jefferson’s second finisher in the varsity girls’ race, said. “It was extremely hot, which affected our team quite a bit, but we all hung in there and pushed through the pain. As a team, we can definitely do better in the next few races.”

“I was satisfied with my individual performance, as it was a new personal best,” Foss said. “The team did well in my opinion; we had the first place finisher in the boys’ JV race, and even though a few people had bad races because of the heat, varsity boys were only 11 points from second place.”

The major letdown of the meet was the freshman girls’ race, although it was the fault of the race coordinators rather than the athletes. The front pack of runners strayed off the course when they took a wrong turn. The girls, including three Jefferson runners, were disqualified when they eventually made their way back to the main road, after running an extra 1.5 miles.

“The freshman girls’ race got a little messed up, but I’m confident they will be able to showcase their talent in the next race,” senior Haley Stumvoll, a team captain, said. “Overall, the girls’ team did well because there were many good performances and season bests.”

Some JV and freshman runners will be competing in a league meet against Edison, Wakefield and Lee High Schools on Sept. 10. The rest of the athletes will train through the next week in preparation for the Sept. 20 Oatlands Invitational, a notoriously difficult race.

“As the first official race of the season, Monroe Parker was a great opportunity to see how we stand as a team going into this season, so now we have a baseline from which to improve,” Foss said. “We don’t have many specific goals for future meets – just to keep training hard to hopefully win a few.”