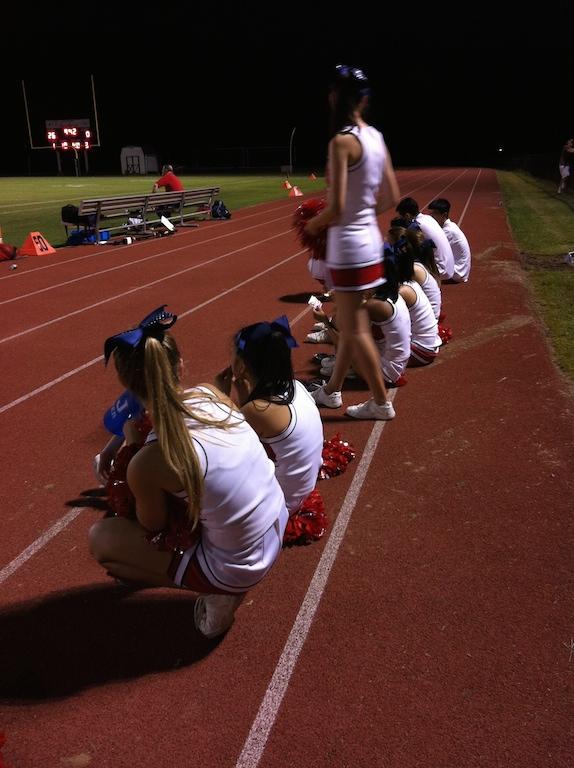 The Colonials cheerleading team takes a water break at half time and waits for the beginning of the third quarter.

For the first football game of the season, Jefferson fans of all ages gathered into the stands to cheer on the Colonials as they faced the J.E.B. Stuart Raiders on Sept. 5. Despite the enthusiasm from the stands on the Jefferson side, the Colonial football team was defeated by the Raiders in the end with a final score of 14-40.

For this week’s game, marking the official beginning of the season, seniors Donny Waymire, Parsa Zand and Jackson DuBro served as captains, and Jefferson took the starting kick off. Within a couple of minutes into the first quarter, the Raiders scored two touchdowns, pulling ahead of the Colonials, 26-0.

Even as the Raiders began to gain points, rapidly leaving Jefferson at zero points, the Colonials did not give up and continued to fight for a win, scoring their first touchdown just after the start of the second half.

“I thought the guys did a great job of continuing to fight even when they were down,” senior Kayleigh Vance said. “It’s tough to go back out there and keep grinding, but they did, which is a great sign for future games.”

With the Raiders scoring a couple more touchdowns in the second half, the Colonials knew they had to keep up with the scoring pace of J.E.B. Stuart. Within the last 22 seconds of the fourth quarter, Jefferson scored their last touchdown and field goal of the night, bringing their score to a final of 14 points.

“My favorite moment was when Nick Lemanski scrambled and shook off a few defenders and hit Donny Waymire down the field for a pretty big gain,” Vance said.

Regardless of the scoreboard, the crowd cheered wildly in support for the Jefferson football team, even though the game was not on Colonial turf.

“TJ has awesome school spirit,” junior Charlie Lertlumprasert said. “I loved how when we got a touchdown, everybody threw baby powder into the air and cheered really loudly.”