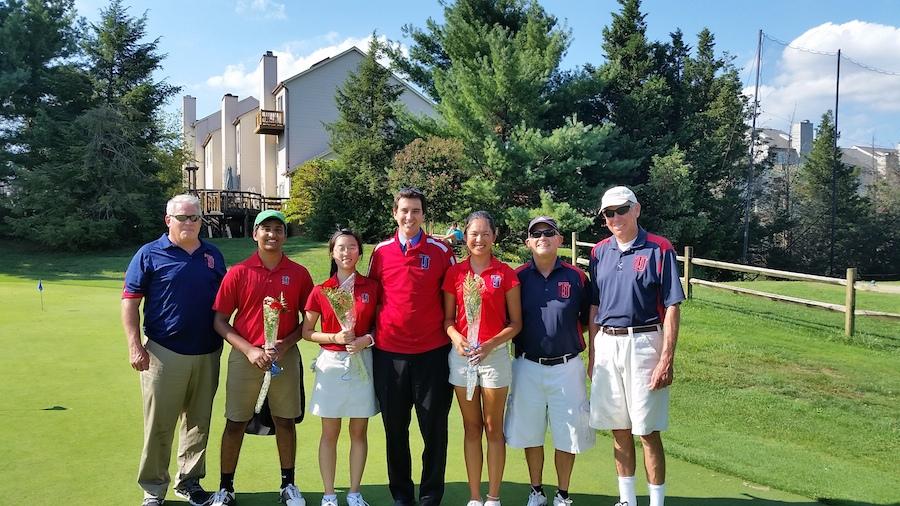 On Sept. 4, the CoEd golf team celebrated departing seniors and ended the regular season with a win over rival Stone Bridge High School in a close match of 149 to 155. The team ended the season with a record of four wins, one loss and one tie.

Before the match, Coaches John Myers and Rick Whittenberger, Principal Evan Glazer and Director of Student Activities and Athletics Rusty Hodges congratulated seniors Sandy Cho, Julie Luo and Rohan Saini for playing on the team for the past four years.

“All the seniors are such an inspiration and people I look up to,” sophomore Christine Wang said. “I learned a lot from them during the short time I’ve known them, and I am going to miss all of them so much.”

Though the regular season has ended, players are currently training to prepare for the Conference 13 Tournament held on Sept. 16-17 at the Greendale Golf Course, located in Alexandria, Va. For example, junior Albert Zeng has been practicing at various courses and driving ranges for preparation.

The players hope that their efforts will translate into success.

“The team has been working hard and we’ve had a lot of guys and girls improve,” junior Peter Andringa said. “I know everyone’s been practicing a lot on their own, and I think we’ve got a pretty good team that’s going to go far this year.”

However, the departing seniors will miss the camaraderie, fond memories and friends they have created during the past four years, as they continue on to play golf in college.

“The team was always so supportive and fun to be around,” Luo said. “I have made some best friends on the team, and for that, I am so grateful.”

They wish the remaining underclassmen can continue the winning tradition of the CoEd golf team.

“I hope the team can keep improving,” Luo said. “These past couple of years we have gotten a ton better, and it would be awesome to keep it up.”