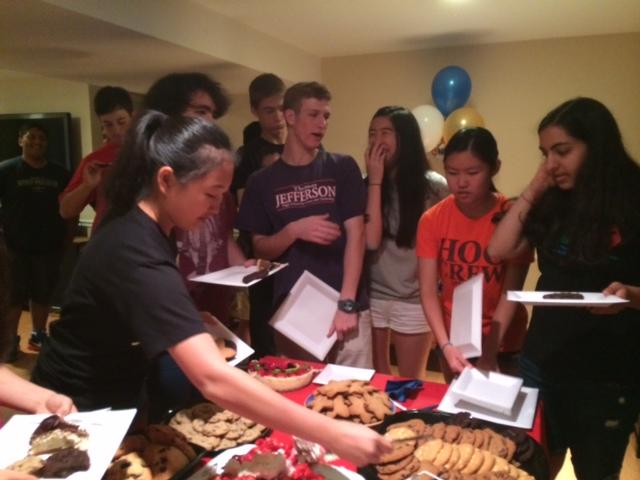 Incoming and upperclassmen froshmores eat dessert at the froshmore BBQ on Friday Aug. 29.

Every year, the upperclassmen who were admitted to Jefferson their sophomore year hold a small orientation at Jefferson for the incoming “froshmores” that is separate from the incoming freshman orientation in which they show the new students around the campus and answer any questions they may have about the coming year at this new school. This year, however, due to renovations, the upperclassmen planned an event at one of the student’s houses to welcome these new students. After careful planning, the plan was set in place and the froshmore barbecue was held on Aug. 29 for three hours in the late afternoon to evening.

While the location was different this year so there was no tour of the building for the incoming students, the new froshmores were still able to ask their upperclassmen counterparts questions about classes, clubs, school spirit, and more. Throughout the entire event, the new students got to know each other better so as to have someone on the first day of classes, and also their upperclassmen so they would be able to ask for help.

“I really enjoy the froshmore orientation every year because it is a chance for us to connect and become even closer to each other than we already are,” senior Minna He said. “We are a close nit community within ourselves and it’s a unique thing to know those twelve or so students in your class so well. It’s even cooler when you are able to point out the froshmores in the other grades and get to know them well too. It’s like a private club.”

Two seniors, Julia Casazza and Brandon Kim, had planned the entire event. They sent out emails to the new students asking them to attend this fun event, set up the Big and Little Sibs with similar interests so that each new student would have one person they could ask questions, and prepared the event itself from the food to the decorations.

In the end, the froshmore barbecue consisted of three hours of fun bonding games, such as mafia, and home cooked food that was prepared by the host and brought by students who attended. All of the new and old Jefferson students spent that time reconnecting and meeting each other while showing the new students what Jefferson has to offer them.

“We started the idea a month before because we needed to have a froshmore orientation somewhere else, because TJ is under renovations,” senior Brandon Kim, a froshmore, said. “We decided to do it at Julia’s house, and putting in a few hours each week, we planned an incredible event that truly lived up to the previous froshmore orientations, even if we could’t give them the TJ tour.”