The early bird catches the worm (and the audience): DOO-WEE-OOO 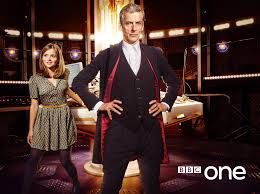 While to the ordinary television viewer this odd phrase sounds like gibberish, all Whovians (fans of the half-century year old drama “Doctor Who”) know it to be the opening noise of the theme song, and were ecstatic last night when it marked the return of the show, which hasn’t been on since Matt Smith’s Doctor’s departure episode in the annual Christmas special in November.

“Doctor Who” is a show about an alien named the Doctor. His form is human, but he is in fact a Time Lord from the planet of Gallifrey, which was destroyed in the Time War, leaving the Doctor as the last Time Lord. He stole a time machine called a TARDIS, but the camouflage is broken, leaving it in the form of a blue Police Box. He travels all of space and time with his human companions and fights enemies who seek to destroy and conquer. The reason this show is so long lived is that the Doctor, when killed, regenerates, creating a new face for himself, so whenever the lead actor departs, he can be easily replaced.

One of the reasons we were all so excited for this season’s premiere was the introduction of the newest doctor, Peter Capaldi. The people behind this amazing show have been hinting for a while that Capaldi is going to take on a very different persona than those of Smith and his predecessor, David Tennant. One of the most notable differences is age, which is a focal point throughout the episode.

One of the best things about the premiere was the bluntness of the new direction, especially the new take on romance. For example, Capaldi’s Doctor specifically says to his companion Clara Oswald (Jenna Coleman) that he is not her boyfriend, and that was a mistake the previous doctor had made.

The romantic component definitely adds something when done correctly; many would cite the tenth Doctor and Rose Tyler as an example of this, as the chemistry between the two characters added another element to the complexity of the Doctor’s character. But with Rose Tyler, Martha Jones (Freema Agyeman), Amy Pond (Karen Gillan), River Song (Alex Kingston) and Clara Oswald all having romantic plots at some point or another with the Doctor, this alien, aloof Doctor is refreshing.

What I though was the weakest point in the episode, although I know most Smith fans will disagree, was Matt Smiths appearance at the end. Clara’s struggle to deal with the regeneration parallels Rose’s after the ninth Doctor was killed, but while Rose was able to understand and overcome the change, Clara was going to leave until she received a phone call from the eleventh Doctor. While the scene was touching, I felt that it betrayed the nature of the regeneration and its permanence.

The interesting thing about Capaldi’s selection was that he has appeared in the show before, during the time of the tenth Doctor. This was touched on and could prove to be the major story arc of this season. I am intrigued to see how the writers deal with this in the upcoming season.