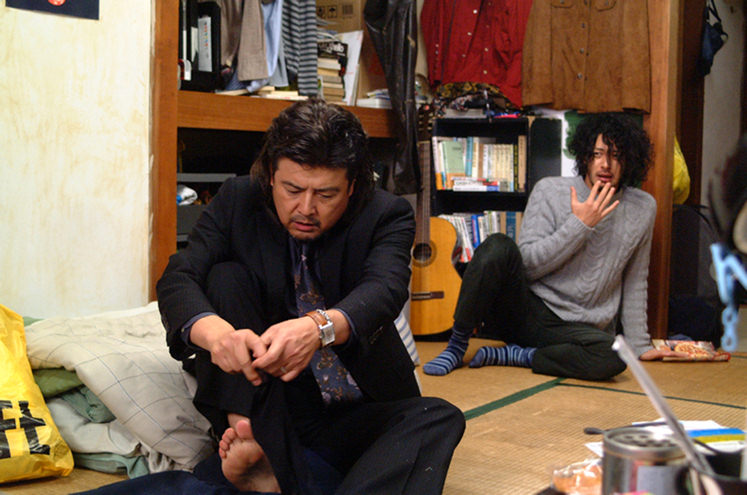 Tomokazu Miura and Joe Odagiri star as Aiichiro Fukuhara and Fumiya Takemura, respectively, in the 2007 Japanese film, "Adrift in Tokyo."

The moment protagonist Fumiya Takemura, portrayed by Joe Odagiri, held up a bottle of Aquafresh toothpaste and described how he thought 3-colored toothpaste could spare him from a “rock bottom situation” before being alarmingly grabbed by a debt collector, Aiichiro Fukuhara, portrayed by Tomokazu Miura, I knew I was in for an off-beat ride to Japan with the 2007 Japanese film “Adrift in Tokyo.”

One of the largest film industries in the world, Japanese cinema is extremely prolific, with many well-known genres from samurai to horror, which Hollywood have attempted to remake relentlessly, and from monster films to animation, especially Hayao Miyazaki’s whimsical tales. This time, as I decided to travel to Asia, I wished to watch something eccentric and comedic, and through Netflix, I found this film.

Based off of a novel by Yoshinaga Fujita and directed by Satoshi Miki, “Adrift in Tokyo” follows the conversations held between these two men and their interactions with kooky secondary characters. Originally out to collect the debt of 840,000 yen, Fukuhara offered a deal to the unfortunate law student that if Takemura accompanied him on walks through Tokyo with him before he turns himself into the police for a crime, he would forgive this debt.

As plain as this plot sounds—just two men walking through a city—subtle situational humor breathed life into these simple scenes, such as sharply-dressed business men riding unicycles past the pair or a gaggle of women holding their purses in the exact same manner as the two discussed why women held their purses in such a way. Sometimes, you had to pay close attention to the surroundings for a moment’s worth of laughter.

Conversations ranging from murder confessions to first kisses weave seamlessly into the walks and actually dictate where the two go next, not sounding overly dramatic or stilted in delivery. In addition, co-workers of Fukuhara’s wife brought comic relief to some of the weighty discussions the pair held, as they, for example, tried to identify the strange smell of one’s hair whorl.

Despite several conversations that may feel dry or boring, “Adrift in Tokyo” is a film with a simple premise but with quirky humor and a big heart. Without histrionics or snobbery, beyond the conversations between two men are reflections on life and salvation, teaching that sometimes the journey is worth more than the destination.