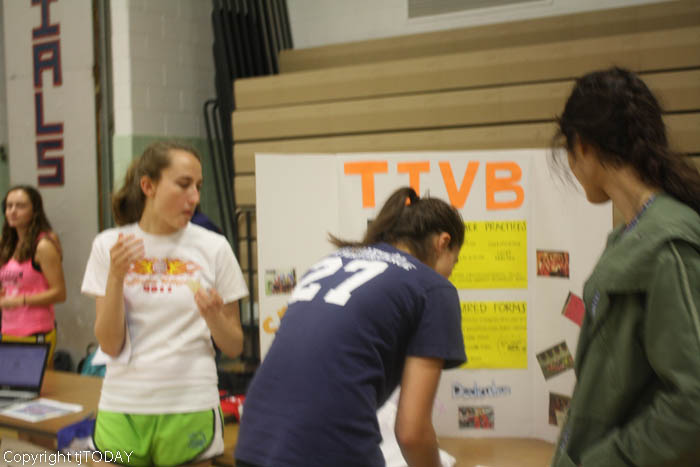 Jefferson hosted its annual Sports Preview night on June 11. The sports preview night is held as an opportunity for sports to inform freshmen about the sports that Jefferson offers. Teams there included crew, cheer, football, lacrosse, field hockey, gymnastics and dance.

Some teams were creative in attracting freshmen to their booths; for example, the crew team had oars and erg machines to let incoming freshmen try the rowing simulators.

“We really wanted to catch the attention of the incoming freshmen,” crew member junior Claire Murphy said.  “The oars really attracted a lot of people who went over to see what they were. The erg was also to attract attention and it also gave the freshmen more of an idea what rowing is like and let them try it out.”

For many teams, sports preview night is important because it allows them to attract freshmen to their teams.

“Sports preview night is important because it gives us a chance to see who well get to work with in the coming season,” junior Jim Henris who is a member of boys lacrosse, said. “At a normal school coaches and players know who they’re getting way in advanced because of youth programs and camps run by the school, but TJ doesn’t have that luxury. It also gives us a chance to get in touch with kids regarding off season practices so we can get them ready for high school lacrosse.”