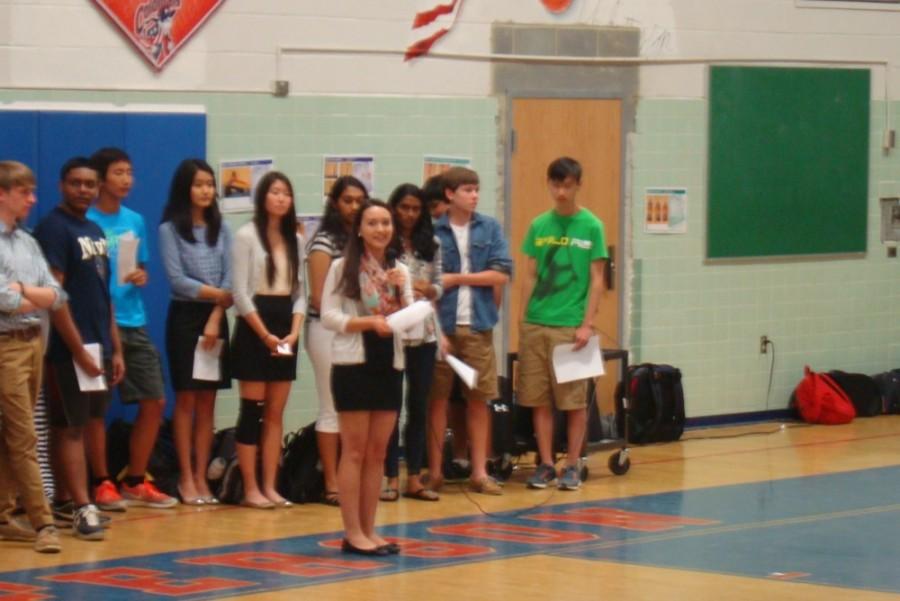 Sophomores present their campaign speeches to their class on June 2 during eighth period.

On June 2, sophomores running for class council and honor council presented their election speeches to the sophomore class during eighth period at Gym 1. The candidates showcased their vision for their position and their determination to improve the Jefferson community through the speeches.

Each year, interested students run for the positions of president, secretary, treasurer, co-historian and senator for their respective class. The students are required to complete multiple prerequisites before being eligible to run for position. The candidates must have attended one interest meeting and submitted an election packet that contains a completed essay, signed petition and various forms that confirm their eligibility as a sound candidate.

Meanwhile, several sophomores also decided to run for a position in honor council to encourage academic integrity and honesty. Out of the 11 candidates, three will be elected to serve as a member of the council, in which they will work with members from all grade levels to spread the significance of the honor code to the students. Beforehand, the candidates were required to submit an election packet that outlined their ideas and goals for the honor council.

“In this competitive and stressful environment, people are often pushed to their limits and make regretful decisions,” Kang said.

During the eighth period assembly, the candidates delivered their one-minutes speeches. Current members of the class council also ran for their desired positions and proposed their ideas for a better developed and run council next year. The candidates for honor council emphasized their dedication to honesty and integrity and promised an ethical and honest school community.

“I love this school for its wonderful community, opportunities and the ambition that drives everyone together,” Kang said. “I don’t want to see the issue of honor bring us down.”