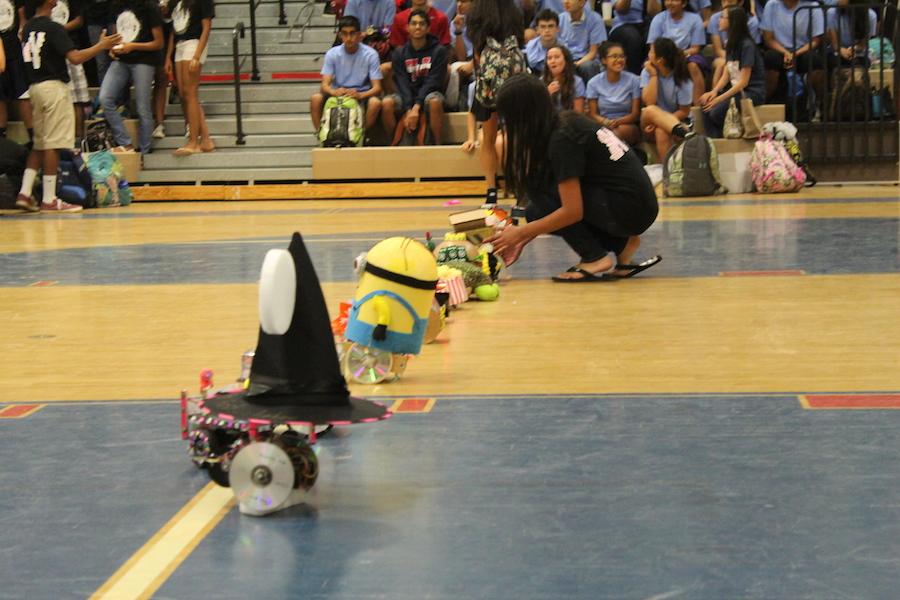 Freshmen designed robots for the BeautyBot category in the robot competition, held May 30.

Gym 1 was no longer filled with bouncing basketballs and flying birdies. Instead, all freshmen, sitting with their IBETs (Integrated Biology, English and Design and Technology), sported class t-shirts as they cheered for their competing classmates in the annual robot competition, held during both blocks of eighth period on May 30.

Every year in their Design and Tech classes, freshmen construct robots out of commonplace materials, including plastic, CDs, metal rods and rubber bands, and code their robots to move at a fast speed or endure a tug-of-war with other robots.

“For the four different competitions: beauty, maze, speed, and power, everyone built their own unique robot. For the maze, everyone coded—using Picaxe Basic—their robot to hit a series of blocks,” freshman Laura Chu said. “It was definitely a challenge but we learned so much along the way and got to apply everything from throughout the year.”

Students first vie within their respective tech classes in one of three categories: BeautyBot, speed and power. The class finalists advance onto the grade-wise competition. For the maze course, however, semi-finals are also held to determine the top seven maze finalists, known as the Super Seven, who move onto to contend in front of the entire grade.

The first category judged with the BeautyBot, in which students design their robots as trends seen in popular culture, from a minion of popular movie “Despicable Me” to Nemo of “Finding Nemo.” Freshman Grey Gola and his light-up UFO, which consisted of many blinking LEDs, placed as first.

“My robot has an arduino, a type of microcontroller, inside of it,” Gola said. “The hardest part was making the body of the robot. The LEDs weren’t that difficult.”

For the speed category, the top winners were freshmen Griffith Heller at second and Quinn Dawkins at first, while freshmen Devon Wood-Thomas and Leo Wang were named first and second, respectively, for the power category.

“My final competition was against a person who was in my same IBET. I’ve seen him many times in study halls when I went to work on my robot. Our finals tug of war was really close, until I tilted his up and it fell down and I lost traction,” Wang said. “But overall, I feel very accomplished, and enjoyed building my robot.”

In the end, freshmen Anshu Sharma was first place and Clara Fontaine was second place for the maze course.

“I’m so incredibly fortunate to have gotten this far – fortunate, indeed, to have reached all the milestones in this project,” Sharma said. “It was hard, it was painful, but it was also incredibly worth it—for all of us, whether or not our robots functioned as we wished.”

In addition, making an appearance for the 10th year in a row was the online retailer ThinkGeek, which helped judge the robots and also increased the excitement by throwing toys to the crowds.

“ThinkGeek was there to give prizes out, and made the freshmen even crazier when they started throwing out random stuffed toys and goods to students on the bleachers,” freshman Caelan Barranta said.

Overall, the competition allowed students to engage in friendly competition with their peers while gaining a deeper understanding of robotics and technology.

“More than anything, this was another learning opportunity, a time to use the lessons learned from the hillclimber to develop a better robot, making more mistakes and learning more things in the process,” Sharma said.