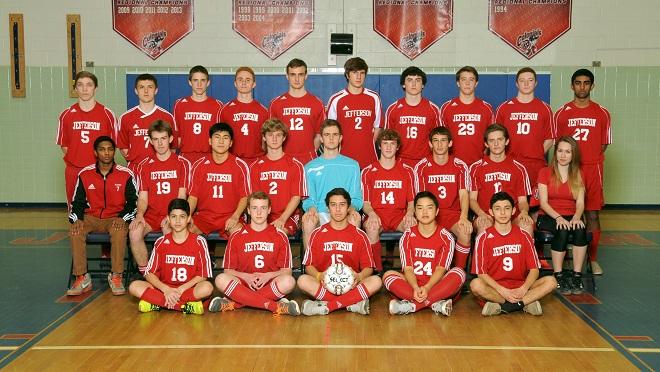 This year, Jefferson boys’ soccer had a comeback.

During the spring 2013 season, the varsity team had two wins, five loses and six ties. They lost two additional games to South Lakes High and Hayfield Secondary in the Liberty District Tournament Semifinals and the Northern Virginia Soccer tournament, respectively.

This year, in comparison, Jefferson Boys’ Soccer has had a strong season, with a total of six wins, four losses and two ties.

“I think our largest improvement is that we played with passion from start to finish. Last year’s team was passionate too but would have a bunch of lapses – this year we had far fewer,” junior Jackson DuBro said.

In their postseason, they won in the Capital Conference 13 Quarterfinals against Edison High School however lost in the Semifinals to Wakefield High School. Only a week later, in the Region 5A North First Round, they beat Loudoun’s Briar Woods High School, located in Ashburn, Va., in a stressful overtime period. The final score was 2-1, and ended up winning only in penalty kicks.

In the 5A Quarterfinals on Monday, June 2, varsity boys continued to win against Mountain View High School, again concluding the game in penalty kicks.

The last game they played on Wednesday, June 4, was against Ablemarle High School. They traveled to Charlottesville, Va. for the game. Unfortunately, after multiple weather-related and lightning delays, Jefferson lost to Ablemarle 5-1. Their goal was scored by DuBro in the first half of the game.

“Last night was a rough game and I think we were worn out from the long trips and exhausting games. I’m really proud of our team though because we played together till the end, even down 5-1, and never stopped working, which just shows how great of a team and family we are,” DuBro said.