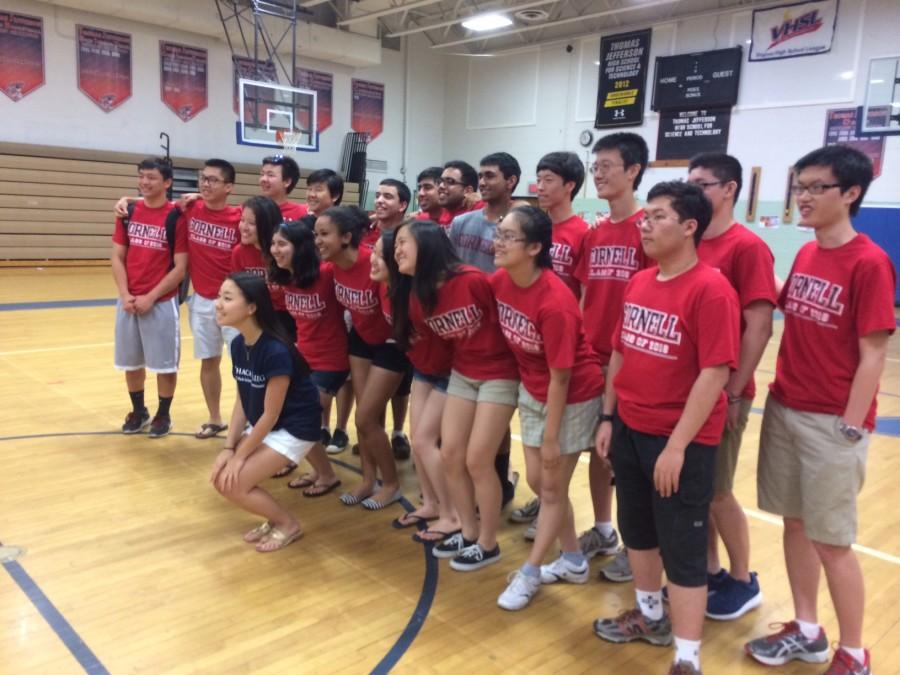 Seniors bound for Cornell University and Ithaca College, both located in Ithaca, New York, pose for a group picture during lunch.

It’s that time of year again. Jefferson seniors have put down their deposits for college in the fall and most have heard back from any waitlisted schools. In the yearly tradition, seniors took to their closets and represented their universities for College T-Shirt Day.

This year’s College T-Shirt Day for the of 2014 occurred on May 27. An anchor day, the date gave the opportunity to students to show off pride for their new homes in all of their classes.

That said, not every senior is a fan of the day.  Some take issue with its main goals.

“Sure, you get to see who goes where before it becomes announced to the public through the newspaper,” senior David Chae said. “However, if these were your close friends that you were wondering about, you should already know where they’re going. This day is just a day of bragging rights and selfies.”

During lunch, many seniors met in Gym 1 in order to take photos.  Some students took photos with others who will remain classmates. Others took pictures with close friends. Either way, most of these photos ended up on Facebook.

“It’s a fun tradition for the end of the year and a great way to find out what everyone’s plans are for next year,” senior Nadège Aoki said. “Everyone who participates does it in good spirits, there aren’t any bad feelings going around since admission season is over.”