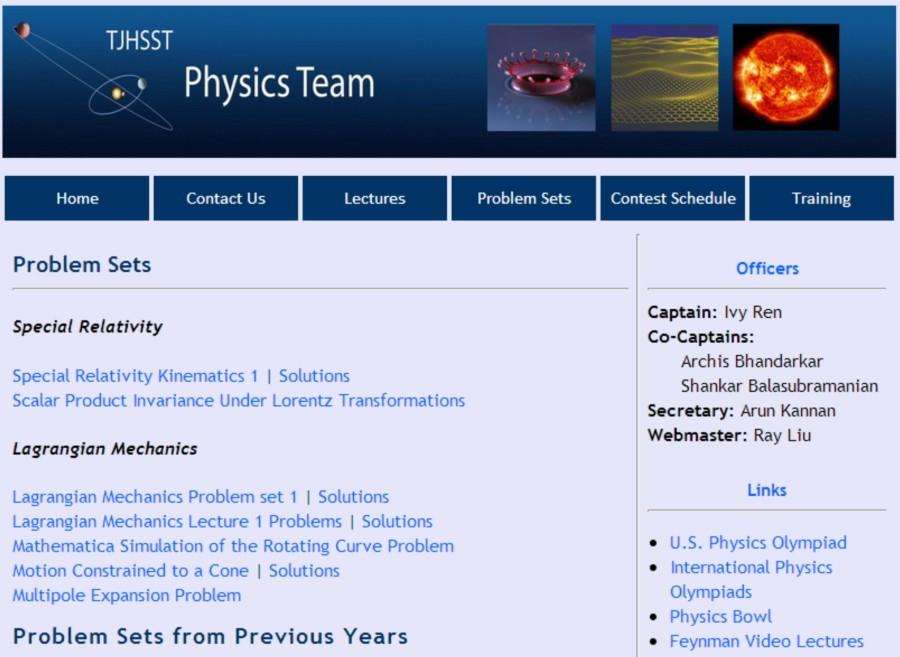 The TJ Physics Team recently received results regarding PhysicsBowl, a competition that the team participated in on April 11. The team finished first in Division 1; this division is limited to first-year physics students, which include the sophomores and most of the juniors on the Jefferson team. In Division 2, the team tied for third place.

Individual students were also recognized for their performance. In Division 1, junior Leon Kim and sophomore Ross Dempsey were named overall winners after finishing seventh and eighth, respectively. Sophomore Nirmann Shanker also placed first in the region behind the overall winners. In Division 2, senior Sreenath Are was named to the merit roll.

Overall, the TJ Physics Team has had an eventful year. Headed by senior Ivy Ren, the team has spent many eighth period sessions training its members for competitions, as well as simply encouraging a passion for the subject through officer-taught lectures, problem sets and hands-on demonstrations.

“My favorite part of leading the team is watching younger students taking their first steps into the world of physics and being able to share my knowledge with them,” Ren said. “During my time as captain this year, I am proud to say that team has been the best organized – with more students signed up for contests, widespread announcements, scheduled weekly student lectures and a thermo lecture by Dr. Osborne.”

Another contest that the TJ Physics Team participated in was the annual F=MA exam, a preliminary test that serves as the first step in the long and demanding process of qualifying for the International Physics Olympiad (IPhO). This year, 70 students signed up to take the F=MA exam on Jan. 27. Seniors Sreenath Are and Victoria Xia, juniors Pranav Balan, Shankar Balasubramanian, Hriday Kamshatti and Leon Kim and sophomores Allen Cheng, Ross Dempsey, Robin Park and Joie Wang qualified for the semifinalist round.

The semifinalist exam, held on March 25, determined the students nationwide who would be invited to the intensive United States National Physics Olympiad (USAPhO) training camp at the University of Maryland. After a grueling week of training in June, the 20 finalists will vie for a spot on the five-member Team USA at IPhO.

Jefferson occasionally places a talented student into the final pool of 20. Last year, class of 2013 alumni Owen Gray and Kalki Seksaria were both invited to the camp, although Seksaria declined the invitation. The year before, class of 2012 alumnus Samuel Nicoll also qualified as a finalist.

This year, results were released on May 14. Although none of Jefferson’s semifinalists moved on, a number received recognition for strong performances. Balasubramanian was awarded a gold medal for finishing in the 10th percentile of test-takers. Are and Xia received silver medals and Dempsey a bronze medal for their top 20th and 40th percentile performances, respectively. Balan, Cheng, Kamshatti and Park received honorable mentions for performing in the top two-thirds.

“It is unfortunate that no one qualified for the camp, but physics is generally the last main science that students are introduced to,” Kannan, Physics Team’s secretary, said. “To be performing this well on contests that seriously test physics knowledge is encouraging.”

To round out the year, students are applying for officer positions for the next school year. Balasubramanian, currently a co-captain, will become the captain next year, while Kannan and sophomore Ray Liu will be co-captain and webmaster, respectively. The remaining positions – second co-captain and secretary – will be open for members to apply.

“We hope to extend our streak of success next year and motivate even more students to pursue physics,” Balasubramanian said.

Another team goal is to increase attendance during regular meetings that are not affiliated with competition preparation. Kannan has also observed this challenge with many clubs centered around contests, such as Biology Olympiad and Math Team, as attendance often drops after major competitions are over.

“We want to redefine Physics Team to avoid this problem and keep audience membership high by constantly showing cool things via demonstrations and activities that combine the scientific theory with real world applications,” Kannan said. “I think Physics Team has a lot more to offer than just contests and lectures – the scientific mysteries of our world are waiting right here, and the onus is on us to go ahead and explore them.”