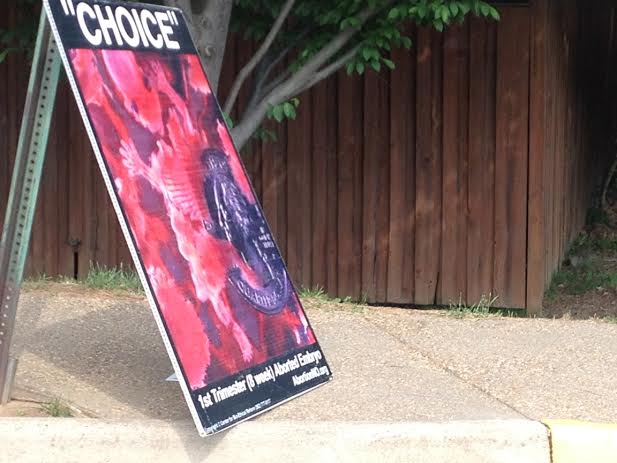 One of many CBR Maryland posters picketed outside Jefferson on Thursday, May 22.

While all this week, Jefferson students have been greeted with sleek, modern posters for next week’s tjSTAR symposium, on Thursday, May 22, the sight leaving the gravel parking lot was a little different.

What makes this situation worse is that the exit these protesters were at was in fact the only exit parents and commuting students alike have to exit school grounds, per renovation changes this year.

Similarly, the content of their posters was highly inexcusable. While it may be one thing to have mandatory requirements, such as hearing a baby’s heartbeat, to a women planning on having an abortion, being forced to look at mutilated fetuses as a non-involved high school student while waiting to exit onto Braddock road was bordering on ridiculous, and well over the boundary of rude. All of this considering that in many schools, parents have to sign off on the yearly, and extremely non-graphic Family Life Education unit provided by the State of Virginia.

Frankly, on top of all the existing issues I have with CBR Maryland’s method of social outreach, the fact is that teenagers really aren’t their key demographic. Not anymore. In 2013, according to the Guttmacher Institute, a non-profit for reproductive health and safety, only 6.4 percent of abortions are accounted for by teenagers 17 years old or under, the age most graduate from high school. The vast majority of abortions, 61 percent, are by women who already had one or more other children—not the typical situation for a Jefferson student.

And, as many students commented later that night on social media, the posters and protesters only tell half of the story, and none depicted the women dealing with the abortion decision. No matter which side an individual, the inaptly squared off “pro-choice” or “pro-life,” the decision to abort or not is being made by a person, not a machine. That individual was represented nowhere among the protestors pamphlets and fliers.

The protest was concluded by a younger-looking male individual walking up to each student’s car separately and offering them a brochure for CBR Maryland’s work, smile plastered on his face as his comrades compared abortion to the new Holocaust.

If CBR is trying to persuade the average Jefferson student, they’ve already got their work cut out for them on this highly-scientific, liberal-leaning campus. But on top of that, except for a few graduating seniors, who are in a position to vote for anti-choice candidates, they’re addressing a population who’s such a miniscule part of the issue itself, and more importantly, doing so in a way that is highly dramatized and left many students seething against CBR on their way back home that afternoon.

Find more information about CBR Maryland and their work HERE on their Facebook page.