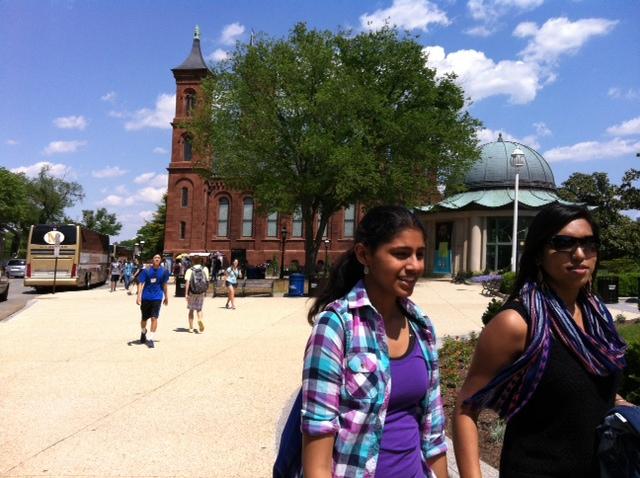 Sophomores and juniors were free to roam around the Smithsonian castle and National Mall area in Washington, D.C. on May 19.

On May 19, instead of sitting in class, the sophomores of Jefferson piled onto commercial buses and traveled to Washington, D.C. Once they had arrived in the city, the student were welcome to explore the National Mall museums, and were directed to visit specific locations based on their humanities I (HUM I) teachers.

Students of the humanities class directed by English teacher Vincent Pollet and history teacher Richard Monteverde started out the morning of the field trip at the Freer and Sackler Galleries of Art, where they were instructed to study three works of their choice from different cultures and civilizations.

“My favorite part of the field trip was simply being able to visit the various museums and enjoying the artwork there,” sophomore Junyoung Hwang, a member of the Pollet-Monteverde HUM, said. “I found the Chinese exhibit in the Freer Gallery to be most interesting, because some of the artwork there could be connected back to important events in history such as the beginning of the Chinese writing system.”

Many sophomores had to study the artwork analytically as well, tracing the date of many of the art pieces back to historical events of the time period in which they were created. In the afternoon, sophomores visiting the National Gallery of Art got the chance to make comparisons between the art seen at the Freer and Sackler Galleries, and the more renaissance based styles of the National Gallery.

“I wish I could have stayed at the National Gallery of Art longer,” Hwang said. “It’s so big, and I think that I would be able to see more of the exhibits if I had more time.”

Other HUM classes spent less time at the Freer and Sackler Galleries, to give the students time to look at other styles of art from various time periods. Sophomores had the ability to roam in and out of the Hirshhorn Museum and Sculpture Garden as well as the National Gallery of Art.

“I liked the freedom we got on the field trip,” sophomore Bita Golshani said. “The fact that we got to do what we wanted and go where we pleased made the experience more enriching because we could explore what we were interested in.”

Golshani’s favorite piece seen at the museums of the National Mall was a piece called “Damage Control” at the Hirshhorn Museum and Sculpture Gallery. In this collection of pieces, artists used a medium which had been damaged in some way to create a piece of artwork.

“I thought it was really cool how the artists could create beauty from destruction,” Golshani said. “I loved it.”

Similar to the sophomores, the juniors ventured to art and American history museums, based on plans tailored to their humanities II (HUM II) classes.

To celebrate the ending of a year-long research project in which they explored a topic featured in the museum and subsequently wrote a paper, students now had the opportunity to check out more exhibits they have missed when visiting the first time to gather ideas.

“Revisiting the Newseum was definitely a positive for me, because it gave me an opportunity to explore more of their exhibits and everything else I missed–which is mostly everything since the first I went we spent the most time absorbed in the Pulitzer Prize Photograph Gallery,” junior Carolyn Chheath said.

They also had the opportunity to visit other museums in the area, including the American History Museum, National Portrait Gallery and American Art Museum.

Other HUM IIs, such as Struck-Gilbert, also visited museums and war memorials.

“Looking around the Vietnam War section was moving, especially while looking at the soldiers’ belongings,” junior Jeong-In Seo said.

Overall, both the juniors and sophomores had an educational and interesting experience right in the cultural and historical capital of the country.

“I thought the museums were really interesting, but the best part was being able to explore DC in our groups,” junior William Liu, a member of the Bourjaily-Zupancic HUM, said.