Moving up the French AP exams was not beneficial to students 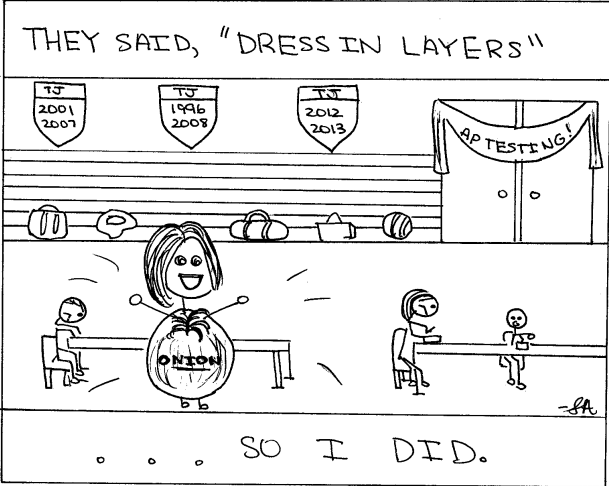 The students taking the French Advanced Placement (AP) exam at Jefferson were released from class at 11:25 a.m., twenty minutes earlier than other students, on May 13. This was due to the exam start time, originally at 12:30 p.m., being moved up to 12:00 p.m. in order to time the exam so that students and proctors could leave on time.

While some students felt that moving up the exam was helpful, so that they could leave school earlier, most sections still released students after school. This meant that students taking buses were still stranded unless they could find another ride and students participating in events just after school, such as track, were late. Thus, the ultimate problem of exams running after school wasn’t solved by the earlier start time.

Unfortunately, the shortened lunch period left some students feeling stressed or flustered. The AP French course is mostly comprised of juniors, so any of these juniors who had planned on doing the physics wave-tank labs during lunch were prevented.  Fortunately, the French department made life a bit easier for the students by providing a place to go while classes were still going on, as well as food.

Another problem for students was the lack of information. French students were not informed of the early exam start time until the morning of the exam, so if they were missing anything in their second period classes or they had something to do during lunch they had very little time to make arrangements.

While moving up the exam was planned to help students and teachers leave earlier, the plan ultimately did not solve the problem but did cause other problems for students as a result of lack of communication. The administration should give students time to plan, especially when missing class. The administration’s plan to move up the exam could have been a good one and has potential to be used in the future more effectively, but only with planning and communication with students ahead of time.