School board should support, not reduce, the performing arts 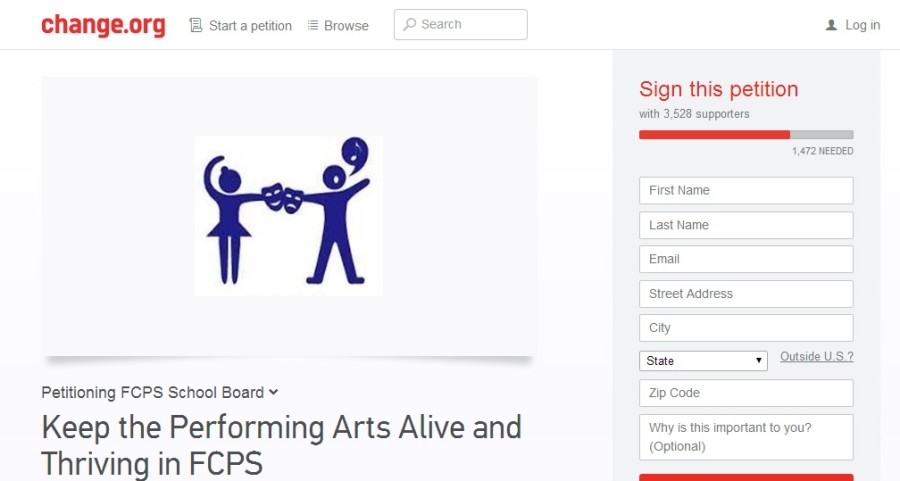 An online petition regarding the Fine Arts Theatre and Dance Specialist position has gained over 3,000 signatures.

When I first arrived at Jefferson, I stumbled upon the school’s theatre department unintentionally–but show after show, I fell head-over-heels in love with TJ Drama, from the people to the productions to everything in between. As a “theatre kid” at a science and tech school, it’s undoubtedly been frustrating–we have very small audiences at our performances, and are often overlooked by the administration and student body. At other high schools, theatre seems to thrive in a public school system which seems to support the arts–that is, until Fairfax County Public Schools decided to cut down the position that serves as a lifeline for theater departments across the county.

FCPS recently reduced the position of the county’s Fine Arts Theatre and Dance Specialist from a full-time to a part-time position. While seemingly insignificant, this position serves as the only full-time resource available for the numerous theater and dance teachers across the county. Several students, teachers and parents gathered at Luther Jackson Middle School on May 13 to voice their opinions on the proposed budget cuts and reduction of the position, while an online petition has gained over 3,000 signatures.

Judy Bowns, who currently holds the position, was also a co-founder of the Cappies program in 1999, an international program for recognizing and celebrating high school theater and journalism students, which has thrived since its creation. As a Cappies critic since my sophomore year, I have benefitted greatly from the program, which allows students to write reviews on other high school productions and be rewarded for their accomplishments onstage and behind-the-scenes. These reviews can be selected for publication by local and major newspapers, and this year, the eight-member Jefferson Cappies Critics Team wrote 98 reviews in total, with 16 of them chosen for publication in the Washington Post. For the chapter representing the Washington-Metropolitan Area, actors and techs are recognized through award nominations at an annual Cappies Gala, held at the John F. Kennedy Center for the Performing Arts. While sports teams are honored through All-District and All-Region recognitions, the Cappies gives “misfit theater kids” a chance to also be recognized and celebrated.

Cutting down the position Bowns currently holds not only places a significant burden on theater and dance directors, teachers and students across the country, but fosters a sense that our county’s school system and its school board are not willing to support our county’s award-winning performing arts programs. In addition, theater programs and departments have continued to diminish in size and support across the county due to increased, mandatory graduation requirements.

This trend has become more evident in the halls of Jefferson. Fewer and fewer students participate in our school’s orchestra, band, choir and theater departments every year. Why would they, when our school allows students to fulfill the only required “Fine Arts” credit through courses such as AP Computer Science? With the minimization of department representation through Bowns, in addition to the graduation requirements placed by the county and individual schools (Jefferson), there is a serious threat for our county’s theater and dance programs–many of which already do not receive funding from their schools at all.

Yes, there is a budget the county must follow. But many of the theatre and dance departments already receive little money from the county compared to other school-sponsored activities. Furthermore, the sole connection and representation these departments can rely on is under jeopardy, because of decisions made by the school board. The same school board which voted to fund a $1.5 million project to install synthetic turf fields in eight high schools. The same school board which voted to fund part of Jefferson’s multi-million dollar renovation (and did we really need to spend that much money on an elaborate Monticello-esque dome and fancy chairs and tables?) . The same school board which, every June, has its members attend the Cappies Gala to present awards and speak about the importance of theater and the performing arts in schools.

In the past few years, the school board has voted time and time again to support the county’s athletic departments and other activities. Only a number of years back, the swimmers and divers of the county protested in outrage to the county’s proposed cuts, which would have affected the county’s swim and dive programs. The decision was reversed, and these teams are still thriving. As a swimmer myself, I was relieved when the decision was made. But what kind of message are we sending to the thousands of students–past, current, and future–if we are willing to support swimmers, but not performers?

Performing arts is often times the only reason many students across Fairfax County find the motivation to wake up at the crack of dawn to go to school. For me, the performing arts and my close-knit TJ Drama family were some of the only reasons I chose to stay at Jefferson. If the thousands of people who gather at the Kennedy Center every year aren’t a testament to the immense talent and passion for the arts in our area, I don’t know what is.

Before the School Board finalizes its budget next Thursday, May 22, they must understand the importance of Bowns’ current position and its crucialness for theater departments around the county. Both the School Board, and Jefferson, need to realize that the performing arts–theatre, choir, band, orchestra–are an essential part of a well-rounded, balanced curriculum and student body.