Senior boys should think before they ask 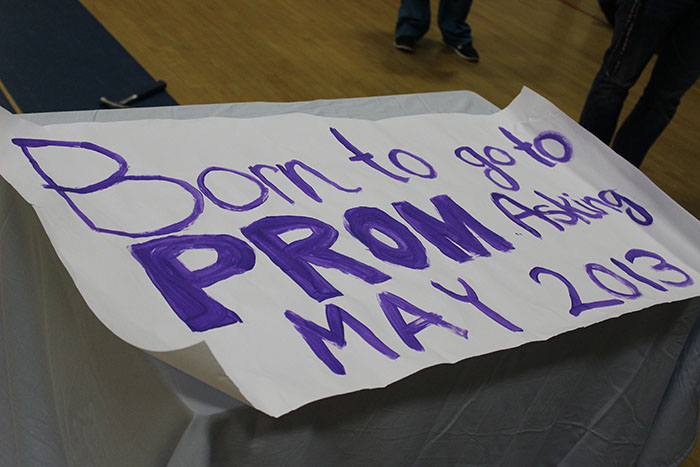 For several weeks in April and May, Jefferson students participate in "Prom Asking Period."

For the past two weeks, the halls of Jefferson have been filled with flowers, balloons, cupcakes and other typical “promposal” fanfare. During a time frame of four weeks affectionately known as “Prom Asking Period,” students pull their wildest cards to create elaborate schemes for their prom askings, which are posted on Facebook and YouTube for posterity.

At Jefferson and at many other high schools across the country, male students will “claim” or “call dibs” on female seniors far in advance through the use of Google Docs, Excel spreadsheets, or in the case of one California high school, an NFL-style draft. While this can seem barbaric and misogynistic, it can also serve a utilitarian purpose–to make sure multiple boys don’t ask the same girl, and to ensure that all senior girls get asked. But every year, there’s always a handful of girls who won’t get asked.

My freshman year, a senior friend of mine asked me to help plan out his prom asking. However, the girl said no to him before he could ask, and he quickly had to find another girl to ask to prom. He also had three junior girls who wanted to be asked by him–three juniors he was very close with. But, there was also a senior girl without a date in his group, someone he was merely acquaintances with. I’ll never forget what he said to me when he made the decision to ask the senior girl to prom: “Every senior girl deserves a date to their prom.” So why are senior girls left without dates, when a number of junior and sophomore girls are asked to prom every year?

After speaking with a few of my male classmates in the past couple of weeks, the answers have somewhat been the same: “Because _____ will look good in pictures with me.” While seemingly shallow, this reason is common amongst both males and females alike–students will often want to go to prom with a date who they find attractive. But how horrible is it for a senior girl to not receive a date to prom because all of her male friends decided to ask underclassmen girls?

I’m not saying that senior boys must ask other senior girls, or that all senior girls must go with senior boys. Many senior boys are dating underclassmen girls, and vice versa. My own prom date is a junior. Senior boys should not be forced to go on a date–prom or otherwise–with a girl they do not wish to go with. But I’m trying to put things into the boys’ perspective. A junior or sophomore girl has many proms ahead of them–a senior girl only has one. So if a male has the option to choose between an underclassman girl who has one or two more years and a senior friend who could potentially be dateless for prom, why not ask the latter?

Yes, as teenagers, looking good in pictures is important to us. But shouldn’t your friendship, and your friend’s happiness, be worth more than that? While you may have fun looking good in pictures, your friend will be dateless for their only prom, unhappy during the weeks leading up to prom as they watch dozens of girls with bouquets of roses. In no way is a senior boy obligated to ask a senior girl to prom, and in no way is a senior boy obligated to ask anyone to prom. But like a wise class of 2011 alum once said, “every senior girl deserves a date to their prom.” If the only reason you’re asking an underclassman over a senior friend is because of looks, perhaps you shouldn’t be friends after all.