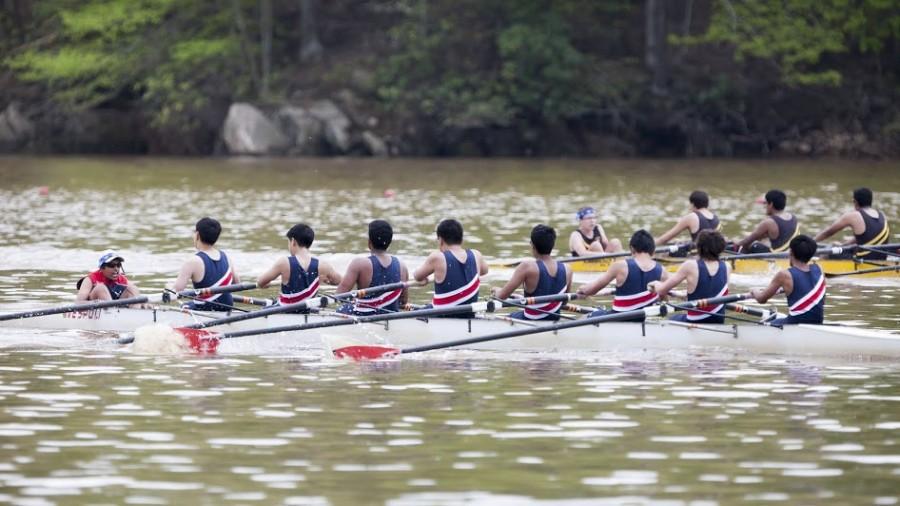 The men's fourth eight placed first in their race at the Ted Phoenix Regatta on May 3.

The lower boats of Jefferson crew attended the Virginia Scholastic Rowing Association (VASRA) State Championships last Saturday on May 3, bringing home several medals to celebrate their success at the regatta.

The women’s third and fourth eight both took first place at the Ted Phoenix State Championship Regatta at Sandy Run Regional Park, in their respective categories. The fourth eight took first place by a close 1.6 seconds, pulling ahead of TC Williams High School in the last 50 meters of the race.

“My favorite part of the regatta was winning,” sophomore Riya Raavi, a rower on the women’s fourth eight, said. “And the best part of winning would probably be knowing that you and your teammates pulled your hardest, and that all of your hard work paid off in the end.”

The women’s third eight’s win at the State Championship Regatta brings their record to a total of five first place titles in all of the preceding VASRA regattas attended by Jefferson crew, and one second place title at the St. Andrew’s Regatta in Middletown, Del. Because of their previous successes, the boat is planning to make a petition to attend Scholastic Rowing Association of America (SRAA) Nationals on May 22-24. Often, boats can only petition to attend SRAA Nationals if they have had a winning season before the regatta.

The Ted Phoenix Regatta was the last of the season for many of the boats of Jefferson crew. Although, both men’s and women’s freshman eight boats, as well as the third eight boats plan to attend the Stotesbury Cup Regatta on May 16 and 17, one of the biggest regattas on the east coast.

“I think everyone on my boat pulled their hardest,” freshman Sai Mada said. “But my favorite part of the Ted Phoenix Regatta was hanging out with everyone at crew before the race.”