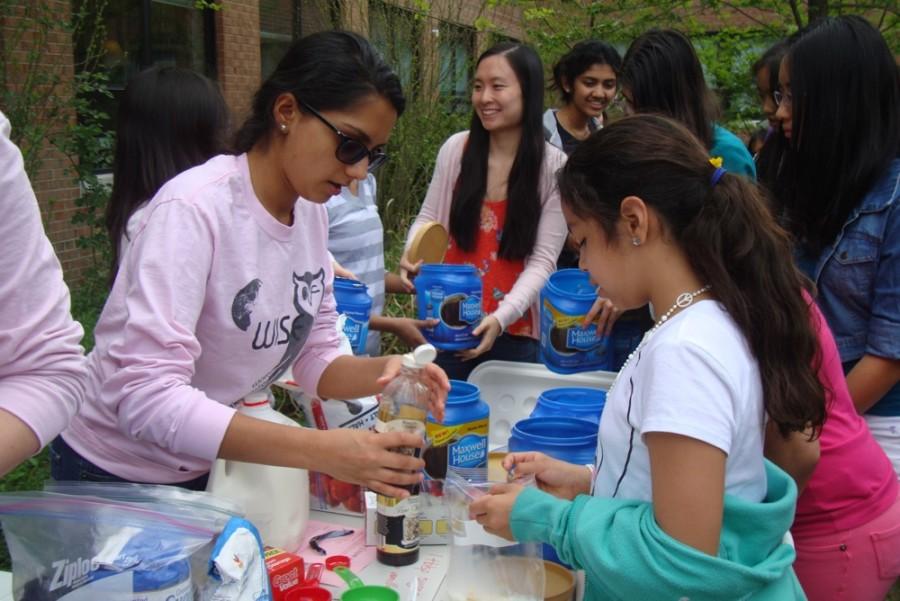 Senior Priya Seetharaman helps a Weyanoke student make an ice cream during an eighth period meeting of Women In Science and Engineering (WISE).

On May 2, Women In Science and Engineering (WISE) concluded their yearlong partnership with Weyanoke Elementary School through an ice cream social. The Jefferson and Weyanoke students gathered at the courtyard at Jefferson, enjoying the sun as they bid their final goodbyes to their lab partners.

“As a girls-exclusive club, WISE strives to provide the girls with an environment where they are hopefully more comfortable asking questions and expressing their ideas,” senior Priya Seetharaman, one of the presidents of WISE, said.

During the eighth period event, the students made ice cream and topped each one with chocolate, syrup and candies. The Jefferson students also brought little bags of presents to give to their buddies, enjoying the last meeting with the Weyanoke students.

Through the club, both Jefferson and Weyanoke students learned the scientific methods behind unique and engaging experiments by asking questions, participating in the labs and forming an amicable relationship with their partners. The club hopes to continue its legacy by acting as the venue for inspiring young, female students into forming an inquisitive mindset and increasing interest in STEM.

“The biggest message we would like to impart in our Weyanoke buddies is that it’s okay to be interested in STEM areas, and in fact, they should be,” Seetharaman said. “It’s a lesson that we’re all learning everyday, TJ buddies and Weyanoke buddies alike.”