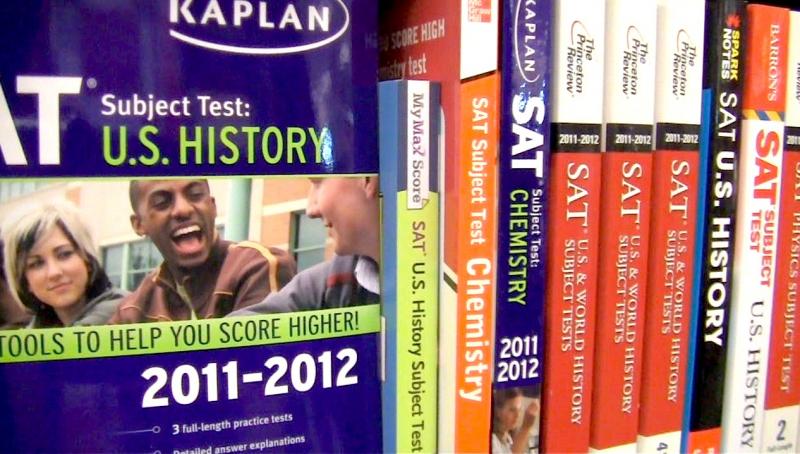 Students prepare for subject tests and SATs through several prep books available at the College and Career Center.

With Advanced Placement (AP) tests happening in the next two weeks and students already in the mindset of standardized testing and many of them have been taking this as an opportunity to get their Scholastic Aptitude Test (SAT) and subject tests out of the way too.

The subject tests that took place on May 3 included mathematics level 1, mathematics level 2, literature, United States history, biology ecological and molecular, chemistry, physics, French, and Spanish and allowed students across the nation and at Jefferson to showcase their skills to colleges. Since many students were already studying for a variety of topics, such as United States history or biology, for their AP tests in the next few weeks, they took the chance to also take these tests while the material was still fresh in their minds.

“I took the tests this weekend because I knew that I would know the material best now since I had just finished studying for my chemistry and history APs,” junior Shirley Burt said. “I felt good after the tests and that makes me see that I’m ready for my AP tests – it was almost like a practice.”

However, some students didn’t take the subject tests, but actually took the SAT instead. They seemed to think that since they were already in the mindset of their finals and exams they should just get all of the stress out of the way in the same month. This idea seemed to be common among the student population as many people took the test in May.

“Taking the SAT in May made me get all of my tests out of the way this month,” junior Marissa Einhorn said. “I am already stressed for AP tests and finals happening right now so what’s one more test? I’m glad I took it now because now I am able to focus entirely on my APs and not on my SATs.”

It seems to be the consensus among students that these tests allowed them to get over some of the stress they are facing, especially for the juniors, since now they have one less thing to worry about while they are taking care of their APs. Overall, while some people might have guessed that these tests would only serve as stressors for the students in a time of incredible stress, getting things out of the way seems to make them feel better in the upcoming weeks.

“I am relieved that the tests are over with and that I can focus all of my energy on my finals and AP exams now,” junior Arielle Ampeh said. “I feel ready to devote all of my time to those upcoming tests now.”