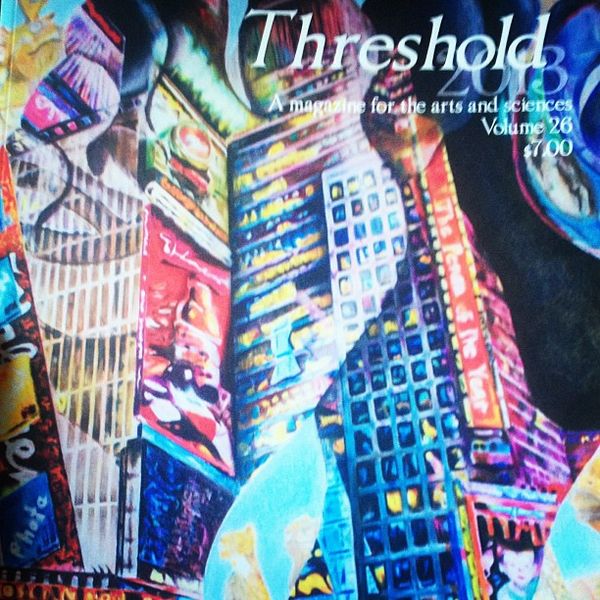 Threshold Literary Magazine from the 2013-2014 school year. This year's edition has not yet been released to the student population.

With months of detailed discussions deciding which of the pieces submitted would be accepted into the magazine and several more months designing, creating and finalizing spreads, the staff of Threshold Literary Magazine for the Arts and Sciences is incredibly proud of their final product which was exported to the published on Friday May 2. The entire staff worked tirelessly for the entire school year, staying after school on multiple occasions, especially in the last few weeks, and attending most eighth periods in order to have the best magazine yet for this school year. “Production is the most crucial and creative part of the magazine process because it is how we convey the piece’s meaning to the readers visually,” junior Ed Fortunato said. “That is why we spent so long perfecting each detail of the designs. Now that we are done, I can honestly say that this year’s Threshold is one of the best ones yet.” Though there were several setbacks this year – very little pieces submitted in the first few months, delays on several crucial parts of the production and technical problems on the school’s computers – the entire staff seems certain that their overall effort has made an incredible magazine. It seems that each and every member, whether an editor or staff member, put in their complete effort to make the best possible publication this year. “I had an incredible time working on the magazine this year,” junior Marissa Einhorn said. “You spend almost all of your eighth periods and after school moments with the same people that eventually you make incredible friendships. These friends and the incredible success you feel when everything works out makes this one of my favorite things about TJ.” As the year draws to a close and the Threshold production weeks are over, all of the staff members reflected on their past year and experiences both on Threshold and as a group. It seems that the majority of the club is bittersweet regarding the final days on staff – the seniors are sad that their last magazine is complete and the underclassmen are excited for the next publication year to begin. “I am incredibly proud of Threshold this year,” junior Julia Casazza said. “I’m a bit sad that we are done since next year will be my last on staff, but I am so incredibly pleased with our work from this year.”