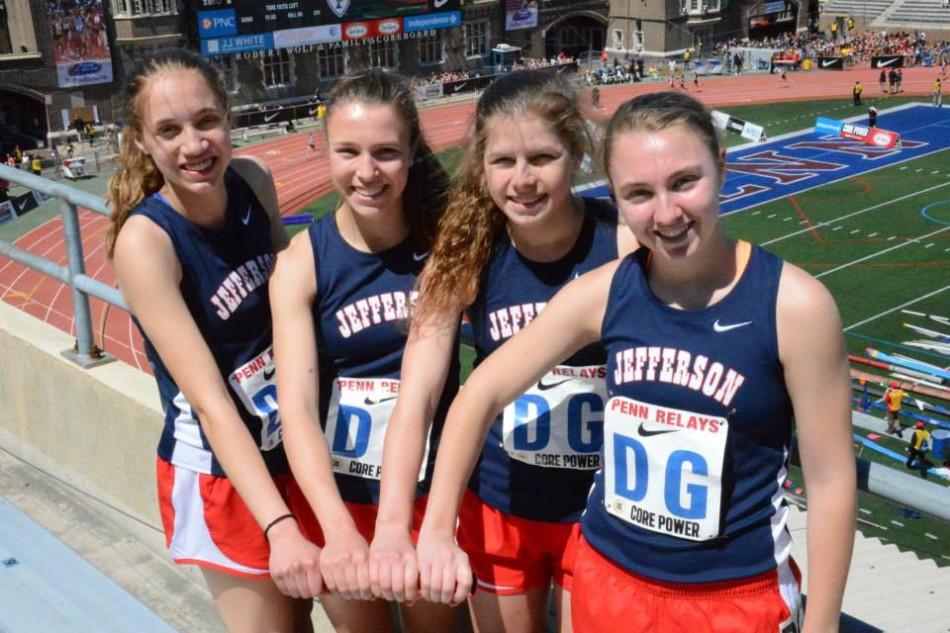 Franklin Field, the University of Pennsylvania’s football stadium and outdoor track, is awash in brilliant colors and a palpable sense of excitement. An enormous crowd fills every inch of the stands, and the whole stadium trembles with barely concealed enthusiasm as the spectators breathlessly watch the runners crouched on the starting line.

A single gunshot rips through the air. Before the puff of smoke fully leaves the starting gun, the runners take off, flying around the first curve in a blur of pumping arms and legs. The race has begun.

This is the scene at The Penn Relays, one of the United States’ largest and oldest track and field events. Also known as the Penn Relays Carnival, the event draws athletes from all over the world, ranging from elementary school amateurs to world-class professionals. This year, over 22,000 athletes participated in the 120th Penn Relays, which was held on April 24-26.

The boys’ 4×400 raced on Saturday morning. Their time of 3:36.11 was a personal record (PR) for the team, and Chidambaram and Simon both set PRs on their individual splits for the 400. The team was even more thrilled when they heard that their time had earned them a spot on the podium.

“I just wanted to go out and do the best that I personally could,” Cai said. “As a relay, we were extremely pleased when we got third and realized that we got medals.”

As a team, the girls ended up running a new PR as well, and Stumvoll ran her fastest 400 yet. They placed ninth with a time of 4:24.27. Going into the race, the girls were not sure what to expect, as all four were distance runners rather than sprinters. They were also unaccustomed to having so many other runners on the track at the same time.

“I wasn’t happy with my individual performance; I was slower than my PR and felt like I could have gone faster if I hadn’t gotten boxed in,” Franke said. “It was hard running first, tactically, because there were 13 relay teams within our heat.”

Running at The Penn Relays was a first for all eight Jefferson athletes. They immediately noticed major differences between competing at Penn and at local invitationals, such as the nerve-wracking feeling of running before a larger audience.

“The best part was definitely the crowd. They were ridiculously into every race, which made running our own race very enjoyable,” Chidambaram said. “Overall it was a great experience, and I think it really exposed me, as well as the rest of my team mates, to the international track and field scene.”

Although they did not have much time to enjoy the surrounding city, the runners still had a memorable experience. When they weren’t racing, they bought new athletic gear, took pictures with and got signatures from professional runners and showed off their dancing skills to win free merchandise.

In the end, all of the athletes were thrilled to have the opportunity to race at such a prestigious meet. They walked away from the experience with broadened horizons and newfound motivation.

“Penn reminded me that track is bigger than just me – there’s a huge community of people who strive every day to push past their pain to compete at a high level,” Moschella said. “It reminded me why I run and made me want to train harder so I can continue to strive for my best.”