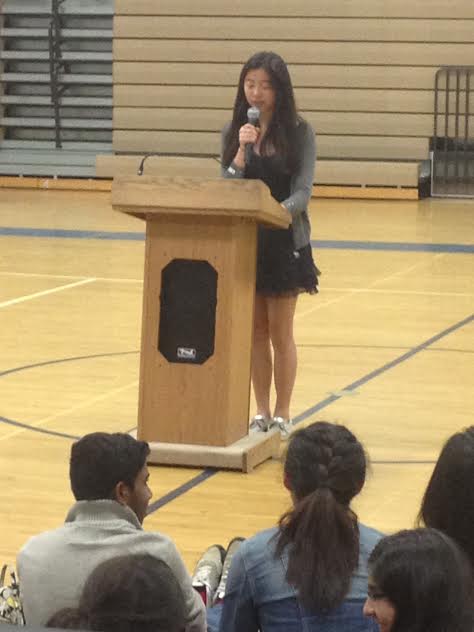 Sophomore Christine Li gives her campaign speech on April 28 during B block of eighth period. Photo by Anshula Rudhraraju.

On April 28, students running for positions in the Student Government Association (SGA) and the Student Advisory Council (SAC) delivered their campaign speeches to the student body during B block of eighth period.

The speeches, which last only one minute, ranged from an innovative rap by junior Solomon Shewit to an impassioned address by sophomore Sahaj Sharda. Candidates aimed to address their individual strengths as well as the changes they would like to make to the school and community.

“I prepared for my speech through my desire to convey my passion and dedication towards leadership and giving back to the TJ community,” junior Sreya Atluri, who is running for re-election in the SAC, said. “I wanted to express how I am the only incumbent who is seeking re-election, and how I want to continue making sure that concerns of the TJ community are accurately brought to the attention of the School Board, so that each and every TJ student has a voice and the right to express their opinions.”

“Most people don’t fully understand everything that SGA is responsible for doing, but some responsibilities include facilitating homecoming, planning J-day, running pep rallies, and making decisions and serving as a voice for the student body as a representative,” Jenny Kim said. “We are constantly working on a project or event, or working with the administration in efforts to continually improve TJ.

Four delegates for the SAC will be chosen. They are responsible for attending SAC meetings and reporting back to the SGA and the school community. Juniors Atluri, Julia Dunbar, William Liu and Shewit, sophomores Shonini Gupta and Christine Li and freshman Anshu Sharma are the candidates for SAC.

“SAC connects high school students and the FCPS School Board, so that the concerns and opinions of the students are reflected in the decisions made by the School Board,” Atluri said.

Though students were entertained by the speeches, they are eager to vote for their future leaders and see the changes they have in mind.

“I enjoyed listening to the speeches, because I got to know the visions that the SGA and SAC candidates have for our school,” junior Amanda Nguyen said.

The voting on Intranet will remain open until 12:00 p.m., May 2. Results will then be announced during A block of eighth period.